Scenes of Privation out of Charles Dickens Haunt Us Today 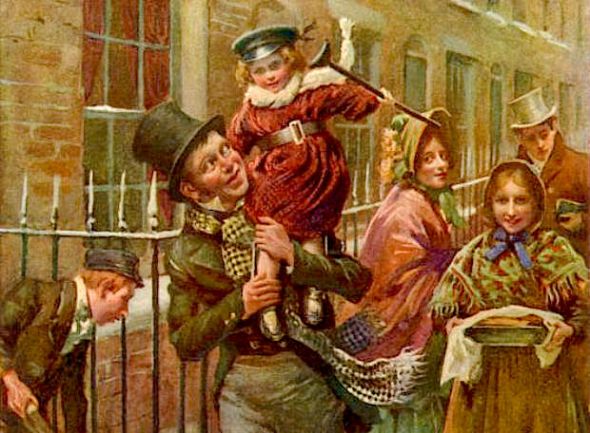 WASHINGTON — Donald Lambro writes:   In Charles Dickens’ “A Christmas Carol,” there is a heart-wrenching scene of the struggling Cratchit family’s meager meal that included a small goose and a tiny plum pudding.

The family is barely scraping by on the minuscule wages paid by the miserly Ebenezer Scrooge. Dickens describes “one small atom of a bone upon the dish” that remained on the table, followed by a “speckled cannon-ball” of blazing pudding with a sprig of holly stuck on top that ended the skimpy Christmas Eve dinner.

“But nobody said or thought it was at all a small pudding for a large family. It would have been flat heresy to do so,” Dickens observes.

Such was the daily life of want and hunger among the poor population in 18th-century London. With so many mouths to feed, Mrs. Cratchit managed to stretch what little they had to eat with a few potatoes and some applesauce.

Here in the world’s wealthiest country, some may think that such bleak circumstances are long since past or very rare. But they’re not. Millions of our fellow citizens are still struggling to feed themselves and their families.

Consider this news story last September about a deeply disturbing report from the U.S. Department of Agriculture’s Economic Research Service:

“An estimated 14.5 million American households had difficulty providing enough food for their families last year, according to a recent government report.

“In seven million of those homes, at least one member of the family had to skip meals or eat less because money was tight. These numbers are more or less unchanged since 2008, the report said.”

It doesn’t get very much, if any, attention on the network news programs, but national poverty rates have been rising under the Obama administration over the last four years at least.

According to the U.S. Census Bureau, 15.1 percent of all Americans were living in poverty in 2010 — the highest poverty rate since 1993.

It wasn’t always this way. According to the government, the official poverty rate declined each year between 1993 and 2000, when it fell to 11.3 percent.

Children bear the brunt of poverty in the U.S. today — accounting for 36 percent of the nation’s poor. In 2010, 16.4 million children were poor.

The Census Bureau reported in 2012 that 46.2 million Americans lived in poverty, as full-time jobs were harder to find and the median income — the midpoint in household income — was 1.5 percent lower than it was in 2010, the second consecutive decline.

Notably, the poverty rate in 2012 was 2.5 percentage points higher than it was in 2007, just before the nation plunged into a deep recession the following year.

A year ago, the overall poverty rate did not budge, stuck at 15 percent, statistically unchanged from where it stood in 2010.

However, The Associated Press reported that between 2011 and 2012, the number of Americans in poverty rose among people 65 and older, people who lived in the South and those who lived in rural areas of the country.

While senior administration officials — from President Obama on down — insist that our economy is improving, there are growing reports of economic distress across the country.

Catholic charities’ food banks said they are seeing many more people in need of food and other assistance this month.

In North Carolina, for example, the Catholic Charities Diocese of Charlotte has seen higher demand at all three of its food pantries.

An Internet search reveals a surprisingly large number of similar reports of lengthening lines at church pantries and community feeding stations — with many of the needy bringing their children.

“The food line started before light outside the stone church with red doors in the South Bronx on a recent Friday,” The New York Times reported earlier this month. “There were grim-faced old men next to weary mothers with children.

“As food pantries struggle to meet increasing demand, the Bronx Spanish Evangelical Church is feeding more people than ever,” the Times reported. Its food pantry gave out the equivalent of 29,000 meals in November, up from 10,000 in March.

Then there was this report from the Times near the end of November across the New York City area:

“This is the time for food lines … because the end of the month is near, which for many families means their food stamp allotment has run out and dollars are tight.”

Scattered “throughout the city, like latter-day versions of Depression photos, grandmothers and children, men and women wait hours for a bag of groceries at a food pantry. Many of the hungriest are children and the elderly. And many have jobs whose hours and salaries have been cut.”

Most Americans, as they go about their daily lives, do not see these food lines because they’re working. But people who need food are lining up every day in cities and towns across the country, a grim, Dickensian testament to the growing poverty that is all around us.

There is a very effective way to combat it: an economy running at full-throttle and robust job creation in all regions of the country. That still remains a very distant dream this Christmas season of charity and good will.