Oregon Sheriff: ‘Gun Control is NOT the Answer’, and Residents Agree 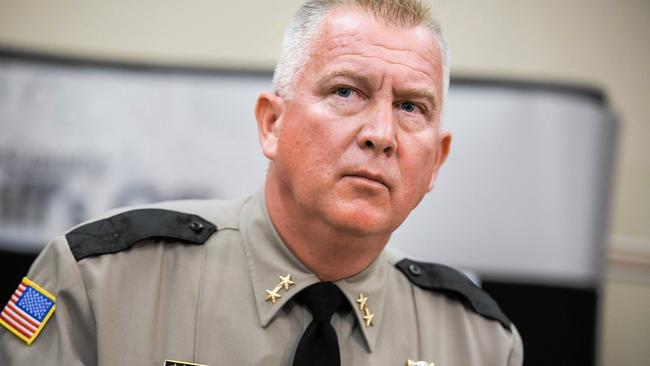 Sheriff John Hanlin informed the vice president he didn’t plan to enforce any laws he found unconstitutional. His deputies wouldn’t either.

Marisa Gerbe writes: “I think that’s the worst thing in the world that can happen,” said Kellim, 86, who runs KC’s Exchange gun shop out of her home.

The words “2nd Amendment” are pasted in a decal onto her front door and there’s a Rifle Range Street nearby. In Roseburg, deer antlers line people’s driveways and locals hardly notice the pop-pop-pop of gunfire from nearby shooting ranges.

“What I fear most, is that we’re going to create criminals … out of some of our most ordinary, normal, law-abiding citizens.”

“This is hunting territory,” Kellim said, smiling proudly. Her views about guns — and who should be able to buy them — didn’t change, she said, when a gunman shot and killed nine people and wounded at least nine others at Umpqua Community College not far from her home.

In Connecticut, state leaders called for stricter firearm laws after the 2012 massacre at Sandy Hook Elementary School in Newtown.

People in Tucson rallied behind then-Rep. Gabrielle Giffords, who became a loud supporter of gun reform after surviving a 2011 shooting at a grocery store.

And when a 22-year-old man stabbed and shot several students in Santa Barbara County last year, one of the victims’ fathers, who grew up hunting, went on every national TV station that invited him and begged for stricter gun laws.

Ross William Hamilton/The Oregonian. Dick and Gloria Shafer, pictured with their 9-year-old son, John, run an excavation business in Elgin. They are so frightened of drug violence, especially after a triple homicide at their town, that they say they sleep with handguns close at hand. Gloria Shafer keeps her 9 mm gun under her pillow.

The tone in Roseburg is different.

An ex-girlfriend of a surviving victim scoffed at the idea of tightening gun laws, and Kendra Godon, an elementary education student who hid from the shooting in a nearby classroom, said she hoped her community’s tragedy wouldn’t get spun into the national debate about firearms.

John Hanlin, Douglas County’s sheriff and the public face of the community since the shooting, is also an outspoken critic of increasing gun control.

On his work biography, the broad-shouldered lawman who once attended Umpqua Community College lists three interests: fishing, riding his Harley and hunting.

When Vice President Joe Biden asked for stricter gun laws after the Newtown killings, Hanlin decided to speak up.

He wrote Biden a letter.

“Gun control is NOT the answer to preventing heinous crimes like school shootings,” Hanlin wrote in a letter posted on the Sheriff’s Office’s Facebook page.

He asked that Biden “NOT tamper with or attempt to amend the 2nd Amendment,” and informed the vice president he didn’t plan to enforce any laws he found unconstitutional. His deputies wouldn’t either.

Around the same time, Hanlin — who keeps his gray hair cropped close on the sides and flat on top — shared a conspiracy theory video about the Sandy Hook shooting on his Facebook page.

“This makes me wonder who we can trust anymore …,” the post read. “Watch, listen, and keep an open mind.”….(read more)

One Comment on “Oregon Sheriff: ‘Gun Control is NOT the Answer’, and Residents Agree”