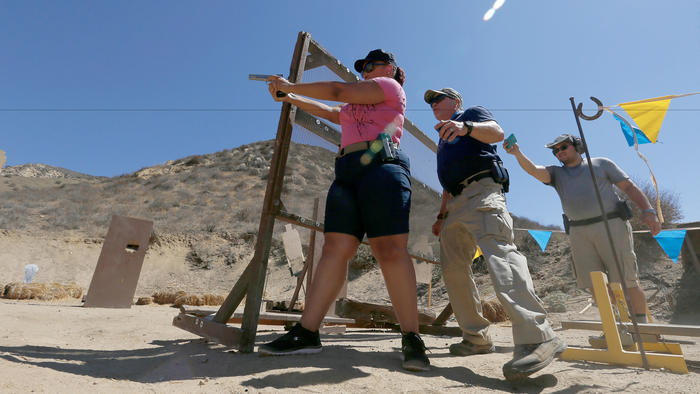 The first Pink Pistols chapter, taking its name directly from Rauch’s article, was started in Boston just after its publication, Patton said. Today, there are 50 chapters in the U.S. and Canada.

Though the group is not, according to Patton, affiliated with the National Rifle Assn., it has worked with them and has become increasingly involved in gun-control litigation. The Pink Pistols filed an amicus brief in the federal appeals case Peruta vs. County of San Diego — in which the court ruled in June that people do not have a 2nd Amendment right to carry a concealed firearm in public and that local authorities can require people to show “good cause” before issuing them a permit to do so.

“We wish to dispel the misleading and insulting caricature that supporters of Second Amendment rights are either tobacco-chewing, gap-toothed, camouflage-wearing rednecks or militia posers who are morbidly fascinated with firepower,” their amicus brief stated.

Because LGBT people are frequently the targets of violence, they have a “particularly acute need for armed self-defense,” the Pink Pistols argued, adding: “Without self-defense, there are no gay rights.”

The Pink Pistols and LGBT groups that have pushed for more gun control cite violence against LGBT people as a reason for their disparate views….(read more)