← [VIDEO] How Is Muslim Immigration to Sweden Working Out?
[VIDEO] CNN Panel Laughs at Democratic Party Disunity, Sanders Refusing to Call Himself a Democrat  →

Census: More Americans 18-to-34 Now Live With Parents Than With Spouse 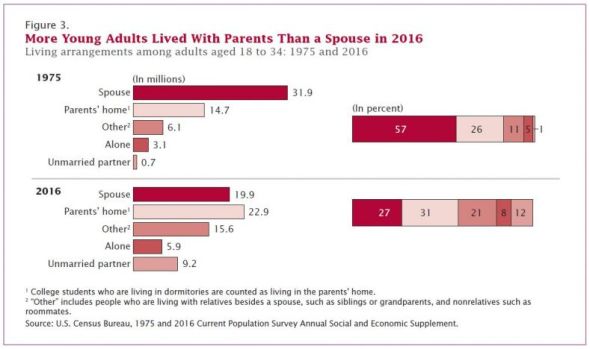 (CNSNews.com) – Four decades ago, in the mid-1970s, young American adults–in the 18-to-34 age bracket–were far more likely to be married and living with a spouse than living in their parents’ home.

But that is no longer the case, according to a new study by the U.S. Census Bureau.

“There are now more young people living with their parents than in any other arrangement,” says the Census Bureau study.

“What is more,” says the study, “almost 9 in 10 young people who were living in their parents’ home a year ago are still living there today, making it the most stable living arrangement.”

The Number 1 living arrangement today for Americans in the 18-to-34 age bracket, according to the Census Bureau, is to reside without a spouse in their parents’ home.

That is where you can now find 22.9 million 18-to-34 year olds—compared to the 19.9 million who are married and live with their spouse.

In 1975, according to Census Bureau data, 31.9 million Americans in the 18-to-34 age bracket were married and lived with their spouse.

Back then, this was the most common living arrangement for that age bracket.

Also in 1975, 14.7 million in the 18-to-34 age bracket lived in their parents’ home; 6.1 million lived in an “other” arrangement (including with siblings, grandparents, other relatives, or unrelated roommates); 3.1 million lived alone, and 0.7 million cohabitated with an unmarried partner  … (read more)

One Comment on “Census: More Americans 18-to-34 Now Live With Parents Than With Spouse” 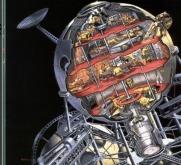