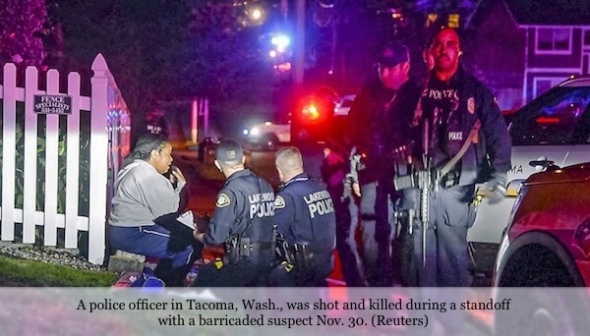 The man, whose name has not been released, had barricaded himself inside a three-story home on the city’s east side late Wednesday afternoon after unleashing bullets on two Tacoma officers who had responded to the residence after reports of a verbal domestic dispute between two people.

“They showed great patience and restraint to make sure those kids were out safe. The whole situation is horrible. We have a deceased officer, but we have a whole lot of heroic ones that went in and got those kids.”

The man’s wife and another woman were able to escape the gunfire Wednesday, reported the News Tribune, but local authorities did not say until after the suspect was killed that two young children remained inside the home throughout the extensive standoff.

The boy and the girl, believed to be aged 8 and 11, respectively, were rescued from the home by a SWAT team around 3:20 a.m. local time Thursday, and were taken to the hospital for an evaluation, authorities said.

Police knew all along that the two children were trapped inside with the gunman, but didn’t share that information with the public for “tactical reasons,” Pierce County sheriff’s detective Ed Troyer told The Washington Post.

“Our priority was to make sure those kids were safe,” Troyer said. “We weren’t going to let those children get hurt.”

Troyer couldn’t say exactly how authorities managed to pull the children to safety, but he told The Post that there were negotiators outside the home and law enforcement officers inside the home who “never left” for the duration of the standoff. The man, who was armed with multiple weapons, had barricaded himself and the two children in an upstairs bedroom and refused to let them go, Troyer said.

The sheriff’s department SWAT team was able to rescue one of the children, Troyer said, then separate him from the second. Before he could reach his weapons, a SWAT officer fired a single, fatal round, and authorities were able to safely remove the children from the home. END_OF_DOCUMENT_TOKEN_TO_BE_REPLACED

Abdul Razak Ali Artan was killed by a police officer after the car-and-knife ambush.

Pete Williams, Tom Winter, Andrew Blankstein  and Tracy Connor report: An Ohio State University student posted a rant shortly before he plowed a car into a campus crowd and stabbed people with a butcher knife in an ambush that ended when a police officer shot him dead, a law enforcement official said.

Abdul Razak Ali Artan, 18, wrote on what appears to be his Facebook page that he had reached a “boiling point,” made a reference to “lone wolf attacks” and cited radical cleric Anwar al-Awlaki.

Two hours before that, a cryptic post on the page said: “Forgive and forget. Love.”

Officials cautioned that they have not determined a motive for the ambush, which sent 11 people to the hospital Monday morning. A senior law enforcement official told NBC News that investigators are trying to determine whether Artan had personal problems or something else that might have pushed him over the edge.

A photo of Abdul Razak Ali Artan that accompanied an interview in the OSU publication The Lantern. Kevin Stankiewicz / The Lantern

“He told a campus publication that on his first day at OSU, he was ‘kind of scared’ to pray in public.”

A police officer was on the scene within a minute and killed the assailant, likely saving lives, university officials said. “He engaged the suspect and eliminated the threat,” OSU Police Chief Craig Stone said.

Law enforcement officials told NBC News that Artan was a Somali refugee who left his homeland with his family in 2007, lived in Pakistan and then came to the United States in 2014 as a legal permanent resident.

He lived briefly in a temporary shelter in Dallas before settling in Ohio, according to records maintained by Catholic Charities.

“If people look at me, a Muslim praying, I don’t know what they’re going to think, what’s going to happen.”

“If people look at me, a Muslim praying, I don’t know what they’re going to think, what’s going to happen,” Artan was quoted as saying in the Lantern.

The violence unfolded just before 10 a.m. ET Monday near an academic hall on the Columbus, Ohio, campus, where 60,000 students are enrolled.

Officials said Artan drove onto campus by himself and rammed the car past the curb and into a crowd on the sidewalk. END_OF_DOCUMENT_TOKEN_TO_BE_REPLACED

San Bernardino Fire Department units were responding to a report of a “20-victim shooting” on Wednesday, authorities said.

The incident was reported in the 1300 block of South Waterman Avenue, the Fire Department tweeted shortly before 11:15 a.m.

San Bernardino police confirmed around 11:30 a.m. there was an active shooter in the area of Orange Show Road / Waterman Avenue near Park Center Circle….(read more) 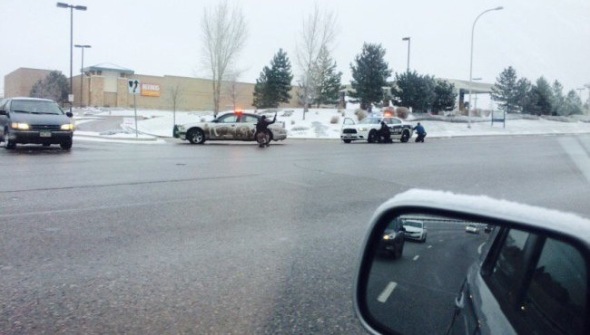 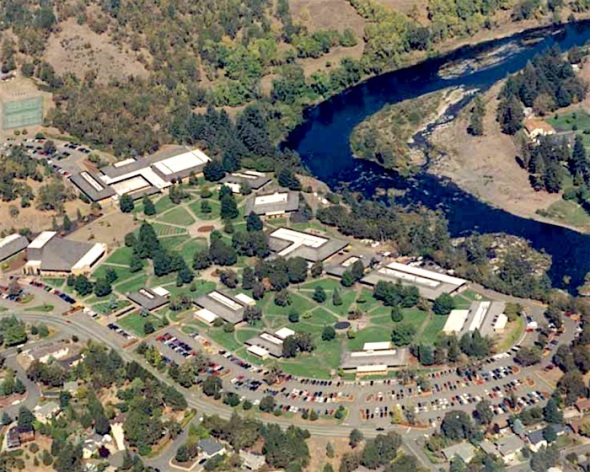 FOX2now.com reports: Authorities were “responding to reports of an active shooter” Thursday morning at the campus of Umpqua Community College in Roseburg, Oregon, a sheriff’s spokesman said.

“There is a situation going on out there but we don’t have any more information at this time,” said Douglas County Sheriff’s Office spokesman Dwes Hutson. 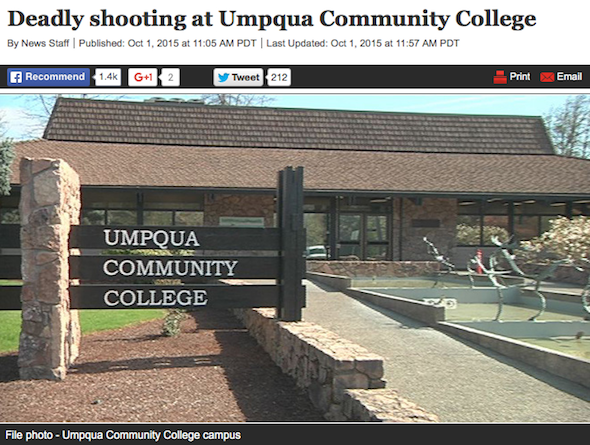 Preliminary information indicates 15 people were killed and more than 20 others injured in a shooting at Oregon’s Umpqua Community College in Oregon on Thursday morning, said Oregon State Police spokesman Bill Fugate. The reports indicate that the shooter has been detained, Fugate said….

Poynter’s Al Tompkins: Should You Use the Video and the Fax from the WDBJ Shooting?

A number of journalists have asked me if I thought it was ethical to use the video of the shooting on air and online. My answer is, “it all depends.” It depends on why you are using the video and how you will use it and how long you will use it.

But consider alternatives. In the early hours after the shooting, the video (complete with horrific audio) was news because the “what” of the story was still unfolding. As the story turns to “why,” the graphic video becomes less newsworthy.

So you have a few options:

What about the shooter’s video?

The shooter, Vester Flanagan, recorded his own actions and posted the video on social media while on the run from police.

That video is, once again, news because it is evidence.

Why air it? The extremely graphic video is a firsthand account of what happened. It shows how close the shooter stood while the crew was on the air. He pointed the semi-automatic pistol at Parker while she continued the interview. He backed off for a few seconds, then raised the weapon again and began firing point-blank.

And it is too graphic to use.

Journalists can be justified in airing or publishing graphic images when the images resolve disputes about what occurred. In shootings involving police, for example, when there is a question about the justifiable use of force, video, even graphic video, can clear or indict the shooter. There has to be a journalistic purpose to justify the graphic image’s use. END_OF_DOCUMENT_TOKEN_TO_BE_REPLACED 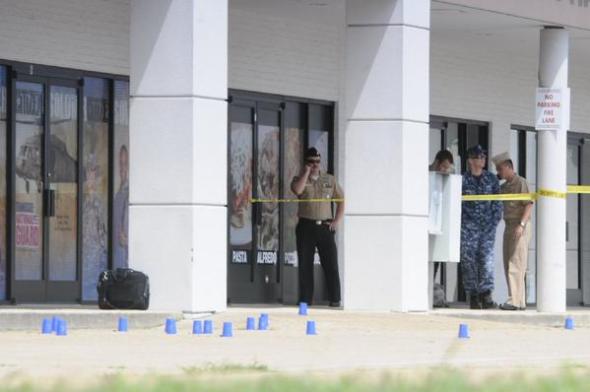 UPDATE: Active shooter situation is over, per Chattanooga Police.  TEMA confirms 5 people are dead, including 4 Marines and gunman, and 2 wounded in shooting at Military Recruitment Center. CBS reports that law enforcement have identified the suspect as Muhammad Youssef Abdulazeez…

The U.S. Navy tweeted Thursday that there has been a shooting at a Navy reserve center on Amnicola Highway in Chattanooga, Tennessee. The Navy also said it was investigating a shooting at another Navy building in the city.

One officer is “down” in connection with the shooting, Chattanooga Mayor Andy Berke told reporters.

He was not specific about the officer’s condition.

“This is a very, very terrible situation and we need to go figure out how we can handle it,” he said.

Meanwhile, a witness in Chattanooga told CNN that she saw a gunman fire shots at a building that houses military recruiting offices Thursday morning. END_OF_DOCUMENT_TOKEN_TO_BE_REPLACED

Update: All Clear after Active shooter Report at Fort Lee

(CNN/AP) — The “all clear” has been given at Fort Lee Army base in Virginia where an active shooter had been reported.

The installation was locked down, the post said, adding that the incident was reported at Building 5020 of the Combined Arms Support Command headquarters.

Retired Maj. Gen. James “Spider” Marks, a CNN military analyst, described the post as a “very active” one, with soldiers “routinely coming and going to get various types of training.”

In an active shooter situation, he said, everyone locks down in place to avoid becoming a target while letting authorities and military police respond. 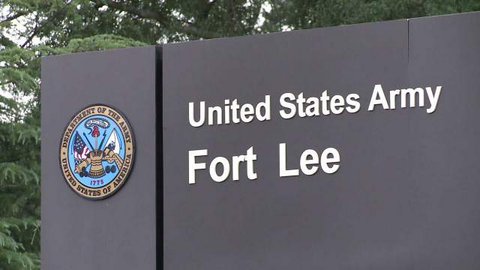 FORT LEE, Va. (AP) — An active shooter has been reported at the Fort Lee Army base in central Virginia.

Officials say the base has been put on lockdown and personnel there have been told to enact active shooter protocols.

The four-story building involved is the headquarters for the Army’s Combined Arms Support Command.

No other details were immediately available.

UPDATE: Report: All Clear Given After Active Shooting Scare at Fort Lee Army Base

END_OF_DOCUMENT_TOKEN_TO_BE_REPLACED 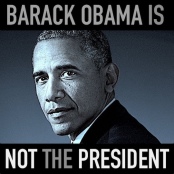 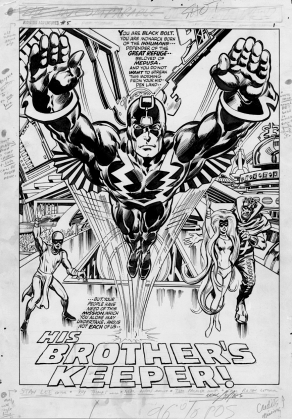