Lohan first responded to a screenshot of a Breitbart article about British baby Charlie Gard, who suffers from a currently incurable disease. His story has made global headlines and received Trump’s support after the parents raised money for the baby to undergo experimental treatment, despite the European Court of Human Rights’s ruling that the hospital can take him off life support.

“THIS IS our president,” Lohan wrote. “Stop #bullying him & start trusting him. Thank you personally for supporting #THEUSA” END_OF_DOCUMENT_TOKEN_TO_BE_REPLACED

The Left has raised America’s political temperature to the boiling point.

Seth Barron writes: Democrats may be horrified by today’s attempted massacre of the GOP House baseball team by an avowed progressive, but their incendiary demands for “massive resistance” since November have been an open plea for the escalation of words into violent action. The daily repetition that President Trump is an illegitimate usurper who stole the election through collusion with foreign powers has been a hypnotic incantation in search of an Oswald: a siren call for an assassin.

We don’t have to look too hard to find extremist rhetoric from influential people whose appeals for violence are only partially veiled. In March, former attorney general Loretta Lynch made a brief video in which she called for people “who see our rights being assailed, being trampled on and even being rolled back” to follow the example of freedom fighters of the past. “They’ve marched, they’ve bled and yes, some of them died. This is hard. Every good thing is. We have done this before. We can do this again.” The Senate Democrats shared Lynch’s call for street action leading to bloody sacrifice on their Facebook page.

At the Women’s March on Washington the day after Trump’s inauguration, Angela Davis’s appeal for militancy was met with cheers. “Over the next months and years we will be called upon to intensify our demands for social justice to become more militant in our defense of vulnerable populations,” announced Davis, who in 1970 bought the shotgun used two days later to murder a judge. “Those who still defend the supremacy of white male hetero-patriarchy had better watch out,” she concluded. At the same event, pop legend Madonna spoke about her fantasies of “blowing up the White House.”

Liberals frequently complain that conservatives disseminate propaganda to their secretly racist supporters via “dog whistle” tactics, which send the desired message in coded language or gestures. The same liberals have dispensed with high-frequency whistles in favor of a simpler message: “Treason!” Following the now-debunked February 14 New York Times report that Trump’s campaign had been in direct contact with Russian agents before the election, a late-night host commented, “It’s funny because it’s treason.” Comedian Rosie O’Donnell led an anti-Trump rally outside the White House, declaring, “He is going down and so will all of his administration. The charge is treason.” END_OF_DOCUMENT_TOKEN_TO_BE_REPLACED

The leaks that led to Michael Flynn’s resignation are just the beginning. Obama and his loyalists in and outside government are working to undermine Trump.

John Daniel Davidson writes: Once out of office, ex-presidents usually fade into private life and stay out of politics. They write memoirs, serve on corporate boards, and start charitable foundations. George W. Bush retired to his ranch in Texas and, most recently, painted portraits of veterans wounded in Iraq and Afghanistan. Bill Clinton was briefly thrust back into politics during Hillary’s two failed presidential campaigns, but most of his post-White House career consisted of flying around the world raising boatloads of money for his family’s now-defunct charity.

“As the leaks keep flowing from our intelligence agencies and the tweets keep flying from former Obama officials, keep in mind that although we haven’t heard much from Obama himself yet, the Trump administration is going to keep feeling the disruptions of what amounts to a shadow government.”

There are exceptions, of course. Jimmy Carter threw himself into international diplomacy, mediating an agreement in 1994 to return exiled President Jean-Bertrand Aristide to power in Haiti, and generally agitating for a Palestinian state.

Then there is Obama. Less than a month out of office, the broad contours of Obama’s post-presidency career are already taking shape. Obama and his loyalists, it seems, will remain in the center of the political fray, officially and unofficially, in an organized effort to undermine the Trump administration.

The bizarre scandal now unfolding over the resignation of national security advisor Michael Flynn is a case in point. Flynn’s resignation was prompted by a series of coordinated and anonymous leaks from current and former Obama administration officials in our domestic intelligence agencies.

“Obama had eight years in the White House to secure his legacy. Any efforts on his part to undermine his successor aren’t just an affront to the principles of our democracy, they’re an admission that he and his acolytes never put much stock in democracy to begin with.”

Regardless of any valid criticism of Flynn, the leaks are part of a larger, loosely organized effort now underway to preserve Obama’s legacy. This effort involves Obama-era officials still inside the federal government, former Obama staffers working in the private sector, and Obama himself.

This isn’t some conspiracy theory. After the election, Obama indicated he intends to stay involved in the political fray. In an email to his supporters on his last day in office, Obama encouraged them to stay engaged, promising “I’ll be right there with you every step of the way.” Less than two weeks later, he issued a statement saying he was “heartened” by anti-Trump protests over the executive order on immigration.

But there’s more to all this than Obama issuing solidarity statements to Trump protestors. For one thing, the former president isn’t moving back to Chicago. The Obama family will remain in Washington DC, within a couple miles of the White House, for the next two years as Obama’s youngest daughter finishes high school. END_OF_DOCUMENT_TOKEN_TO_BE_REPLACED 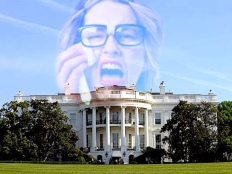