Within minutes of North Korea’s ICBM launch, South Korea had fired its own missile launch in retaliation.

The North Korean missile was fired eastwards from the hermit state. The missile landed about 210km west of Japan’s Kyurokujima island, Tokyo said. 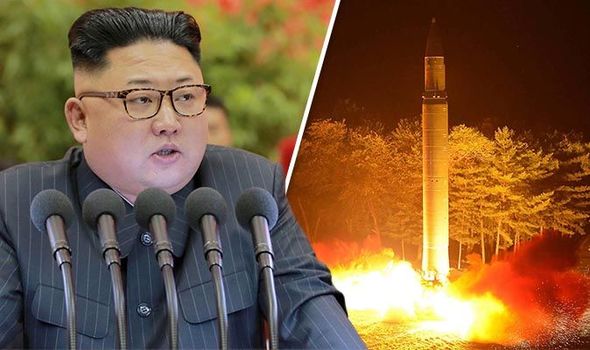 Japanese media reports the missile was in the air for 50 minutes – indicating a very high altitude flight path.

It travelled east for around 620 miles and to an altitude of 2,500 miles before crashing into the Sea of Japan.

US leader Donald Trump was briefed on the missile while it was still in the air.

This late-night launch is rare, with most taking place during daylight hours.

A South Korean military official said earlier this evening: “We confirm that we have detected a North Korean ballistic missile launch. The missile is still travelling towards the direction to the East Sea, as we are monitoring right now.

“North Korea fired an unidentified ballistic missile early this morning from Pyongsong, South Pyongan to the east direction. South Korea’s Joint Chiefs of Staff is analyzing more details of the missile with the US side.”

An emergency meeting of Japan’s cabinet over conference call was scheduled for 3.30am local time (6.30pm GMT). A full cabinet meeting will take place this evening … (read more)

END_OF_DOCUMENT_TOKEN_TO_BE_REPLACED

“They have engaged in a lot of hue and cry over Iran’s missile capabilities, but they should know that this ballyhoo does not have any influence and they cannot do a damn thing,” Khamenei said, according to the semi-official Fars News Agency.

[ALSO SEE – The Iran Deal Wasn’t About Nukes At All – thefederalist.com]

Iran in March tested ballistic missiles, including two with the words “Israel must be wiped off the earth” emblazoned on them, according to the US and other Western powers. Under a nuclear deal signed last year between world powers and Iran, ballistic missile tests are not forbidden outright but are “not consistent” with a United Nations Security Council resolution from July 2015, US officials say.

According to the UN decision, “Iran is called upon not to undertake any activity related to ballistic missiles designed to be capable of delivering nuclear weapons, including launches using such ballistic missile technology,” until October 2023.

“The US and other powers are extremely sad at this issue and they have no other option; that is why they made huge efforts in order to bring the country’s decision-making and decision-taking centers under their control, but they failed and God willing, they will continue to fail,” Khamanei said on Monday.

The supreme leader, who has final say on state matters, lambasted the “arrogant” Western powers, arguing that efforts to shut down its nuclear program and missile tests were a pretext to meddle in Iran’s affairs. END_OF_DOCUMENT_TOKEN_TO_BE_REPLACED

Damian Paletta, Danny Yadron and Jennifer Valentino-DeVries report: Countries toiled for years and spent billions of dollars to build elaborate facilities that would allow them to join the exclusive club of nations that possessed nuclear weapons.

“The acronym was MAD—mutually assured destruction—which kept everything nice and tidy. Here you have the same acronym, but it’s ‘mutually assured doubt,’ because you can never be sure what the attack will be.”

–Matthijs Veenendaal, a researcher at the NATO Cooperative Cyber Defence Centre of Excellence, a research group in Estonia. “

Getting into the cyberweapon club is easier, cheaper and available to almost anyone with cash and a computer.

A series of successful computer attacks carried out by the U.S. and others has kicked off a frantic and destabilizing digital arms race, with dozens of countries amassing stockpiles of malicious code. The programs range from the most elementary, such as typo-ridden emails asking for a password, to software that takes orders from a rotating list of Twitter handles.

The proliferation of these weapons has spread so widely that the U.S. and China—longtime cyber adversaries—brokered a limited agreement last month not to conduct certain types of cyberattacks against each other, such as intrusions that steal corporate information and then pass it along to domestic companies. Cyberattacks that steal government secrets, however, remain fair game.

This comes after other countries have begun to amass cyberweaponry on an unprecedented scale. Pakistan and India, two nuclear-armed rivals, regularly hack each other’s companies and governments, security researchers said. Estonia and Belarus are racing to build defensive shields to counter Russia. Denmark and the Netherlands have begun programs to develop offensive computer weapons, as have Argentina and France.

In total, at least 29 countries have formal military or intelligence units dedicated to offensive hacking efforts, according to a Wall Street Journal compilation of government records and interviews with U.S. and foreign officials. Some 50 countries have bought off-the-shelf hacking software that can be used for domestic and international surveillance. The U.S. has among the most-advanced operations.

In the nuclear arms race, “the acronym was MAD—mutually assured destruction—which kept everything nice and tidy,” said Matthijs Veenendaal, a researcher at the NATO Cooperative Cyber Defence Centre of Excellence, a research group in Estonia. “Here you have the same acronym, but it’s ‘mutually assured doubt,’ because you can never be sure what the attack will be.”

Large conventional militaries and nuclear forces are ill-suited to this new kind of warfare, which evens the playing field between big and small countries. Cyberattacks are hard to stop and sometimes impossible to trace. The West, as a result, has been forced to start reconfiguring its militaries to better meet the threat.

“With some countries, we’re comfortable with knowing what their capabilities are, but with other countries we’re still lost. We don’t have the visibility into their toolset.”

— Andre McGregor, a former cyber special agent at the Federal Bureau of Investigation and now the director of security at Tanium Inc.

Access to cyberweapons, according to U.S. and foreign officials and security researchers, is far more widespread than access to nuclear weapons was at the height of the nuclear arms race, a result of inexpensive technology and the power of distributed computing.

“It’s not like developing an air force…You don’t need to have your own cyberforce to have a very robust and very scary offensive capability.”

— Michael Schmitt, a professor at the U.S. Naval War College and part of an international group studying how international law relates to cyberwarfare.

More than two dozen countries have accumulated advanced cyberweapons in the past decade. Some Defense Department officials compare the current moment to the lull between the World Wars when militaries realized the potential of armed planes. END_OF_DOCUMENT_TOKEN_TO_BE_REPLACED