Bradford Richardson reports: The White House was locked down on Thursday afternoon when an intruder jumped the fence, according to the Secret Service.

The jumper, identified as Joseph Caputo, was immediately detained.

The first family was reportedly celebrating Thanksgiving inside the mansion when the incident occurred, at 2:45 p.m.

Images shared on social media showed a man wrapped in an American flag jumping the North Lawn fence and raising his arms after he landed….(read more)

Thousands march on the legislature to demand a freer vote

Joanna Plucinska reports: Nine months after the Umbrella Revolution began, pro-democracy protesters again took to the streets of Hong Kong to demand a say in the way the city’s leader is elected in polls slated for 2017.

“We’re not North Korea, we know what freedom is.”

A crowd of 2,000 to 3,000 people—workers and families as well as students and democracy activists—marched on Sunday afternoon from Victoria Park, a traditional gathering place for protests, to the legislature buildings downtown. Many carried yellow umbrellas—adopted as the symbol of Hong Kong’s democracy movement after protesters took to carrying them during last year’s unrest to protect themselves from police pepper spray.

Riot police use tear gas against protesters after thousands of people blocked a main road at the financial central district in Hong Kong, Sunday, Sept. 28, 2014. Hong Kong police used tear gas on Sunday and warned of further measures as they tried to clear thousands of pro-democracy protesters gathered outside government headquarters in a challenge to Beijing over its decision to restrict democratic reforms for the city. (AP Photo) HONG KONG

Others carried signs that read “Citizens Against Pseudo-Universal Suffrage,” declaring their opposition to the form of democracy described in a political reform bill to be voted on by the city’s legislature on June 17. That bill will allow the central government in Beijing, and a 1,200 member electoral college composed mostly of pro-establishment figures, to vet all candidates for the position of Chief Executive, as the city’s top official is known. Similarly unrepresentative electoral methods helped to spark last fall’s Umbrella Revolution, and protesters are once again demanding broader political rights.

“I’m a genuine citizen of Hong Kong, I’m not from China. Most people from China are after money, but I’m after truth.”

“We’re not North Korea, we know what freedom is,” said Carol Lo, 35, a protester at Sunday’s rally and a parent of a 9-year-old girl. Lo voiced fears for the political future of Hong Kong’s next generation: “How will [my daughter] survive, if this situation gets worse and worse?” she said.

Policemen rest following pro-democracy protests in Hong Kong on September 29, 2014. Police fired tear gas as tens of thousands of pro-democracy demonstrators brought parts of central Hong Kong to a standstill in a dramatic escalation of protests that have gripped the semi-autonomous Chinese city for days.  XAUME OLLEROS/AFP/Getty Images)

Another protester, Uber driver Chao Sang, voiced the growing tendency of many Hong Kongers to see themselves as politically, linguistically and culturally separate from mainland Chinese. “I’m a genuine citizen of Hong Kong, I’m not from China,” he told TIME. “Most people from China are after money, but I’m after truth.” END_OF_DOCUMENT_TOKEN_TO_BE_REPLACED 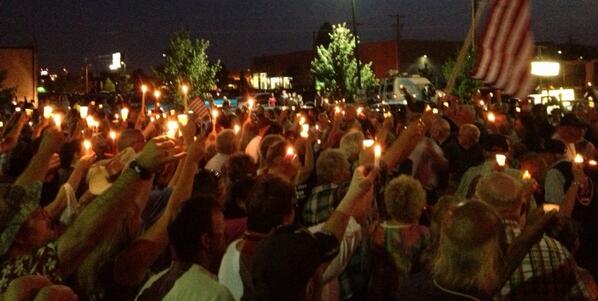