Stop Hating White People and Maybe They’ll Vote for You

It’s either that or the Magical Intersectional Muslim Transwomen Coalition.

Daniel Greenfield writes: After a competitive race between the FBI and sexism, the left decided to blame “white people” for Hillary’s defeat.

“Spare me the euphemisms. White people made Trump president,” a Washington Postheadline blared. “White people did this. And maybe (hopefully) not my friends — but certainly their cousins, their uncles, and their friends,” a racist Vox writer shrieked.

Majorities of white people did indeed vote for Donald Trump. Oddly enough the left’s culture war of hating white people has only made them more likely to vote for anyone other than the left.

Funny how that works.

Trump won by boosting margins and turnout among working class white voters. The same group that the left trashes in its tirades about “white people”. When Samantha Bee says that white people ruined America, she isn’t talking about herself or the white hipsters sharing her videos on social media. We all know it means the bad kind of white people who shop at Walmart instead of Whole Foods, who drink Pabst unironically, who don’t listen to TED talks or own their privilege, who didn’t graduate from Amherst or from any college, but who fly American flags, drive pickup trucks and serve in the military.

A whole lot of those folks used to vote Democrat. Some kept on voting that way until fairly recently.

But the left grabbed the wheel of the Democrat Party, shoved the white working class out the door and replaced it with a glittery rainbow coalition of illegal aliens, Muslims and transgender activists who lost the White House, Congress, the Supreme Court and all but a handful of state legislatures.

Forget losing the South. That’s old news. Republicans won Pennsylvania and have the biggest legislative dominance since Eisenhower. Trump came the closest since Nixon to taking Minnesota and Republicans now have a state senate majority. Do we really need to talk about Wisconsin, Ohio or Michigan?

White men were racist and sexist. The white men who had voted for Obama but switched to Trump were more sexist than racist. The white women who voted for Trump over Hillary were, in the words of Hillary’s communications director, suffering from “internalized misogyny”.

Or maybe they just didn’t like being hated. Here’s what the left’s social justice politics had to offer them.

“White Women Failed Hillary Clinton. They Also Failed Other Women”, “White Women Sent a Terrible Message on Tuesday”,   “Blame White Women for Country’s Failure to Shatter Glass Ceiling” and “White Women Sold Out the Sisterhood and the World”. Maybe even the galaxy and the universe.

The latter article whined that, “Most white women don’t want to be part of an intersectional feminist sisterhood” because they “identify more with white men than they do with black women, Latina women, Muslim women, transwomen” and defected from “the coalition of nonwhite, nonstraight, nonmale voters who were supposed to carry Clinton to a comfortable victory”.

Why would they ever do that?

In that intersectional feminist sisterhood, white women occupy the lowest possible rung and are constantly denounced for their privilege. White feminism is a slur. Why didn’t white women want to stick around in the intersectional sisterhood where they can be inferior to Muslim nonstraight transwomen and fight for their right to blow themselves up in the ladies’ room of a Target? END_OF_DOCUMENT_TOKEN_TO_BE_REPLACED

In the same interview, the hotel heiress joked that she might consider running for president in the future.

Ryan Parker reports: Paris Hilton on Thursday revealed that she voted for Donald Trump to become the 45th President of the United States.

The 35-year-old businesswoman and hotel heiress told the Australian Network, Ten’s The Project that she voted for the billionaire businessman over Hillary Clinton. She explained why.

[AUDIO] REASON: The Case for (Skeptical) Optimism about Trump’s Presidency

A selection of interviews with libertarian thinkers, who say the billionaire bully might be better than Obama and Hillary on foreign policy, education, and more.

Since the election of Donald Trump, we’ve been talking to libertarian policy experts about what a Trump presidency will bring to health care, education, foreign policy, and the justice system. The people we talked to are Michael Cannon of the Cato Institute, Lisa Graham Keegan, former head of education in Arizona, historian Thaddeus Russell, legal scholar Randy Barnett, and defense attorney and legal blogger Ken White of Popehat.

To our surprise, the mood is one of skeptical optimism. All agree that Trump is likely to hand off the details of policy and day-to-day operations to his cabinet secretaries and administrators. In many cases, those people are almost certain to be preferable to ones selected by Hillary Clinton. And even when when they are not, there’s reason to believe that a resurgent Congress and bureaucratic inertia will put a stop to Trump’s worst desires. END_OF_DOCUMENT_TOKEN_TO_BE_REPLACED

The Man Behind the USC/L.A. Times Poll that Predicted Trump Winning: ‘Beats Me!’ 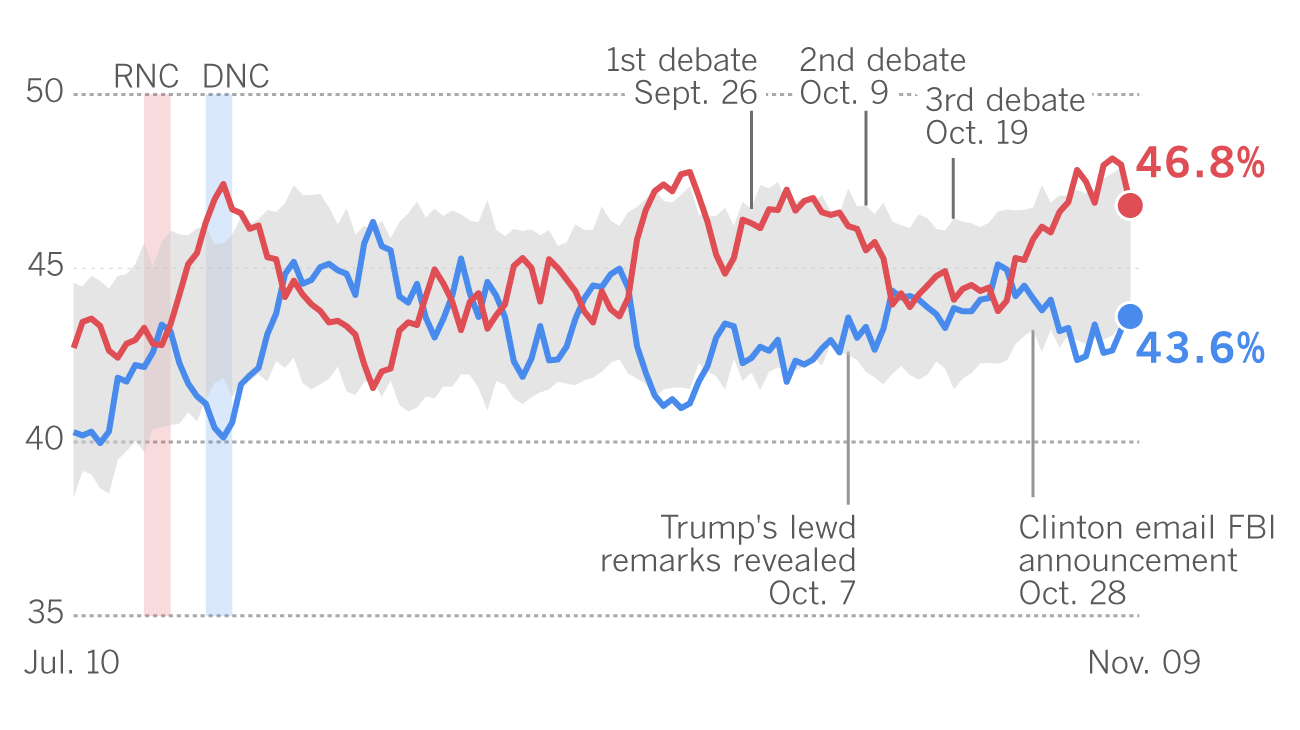 It was the only major public survey that consistently showed Donald Trump winning.

David Lauter reports: As election returns rolled in Tuesday night, the creator of the USC/Los Angeles Times Daybreak tracking poll was in Washington for a speaking engagement. He watched the results on television in a hotel bar, surrounded by about 20 drunken Danes who were in the capital to study the election.

“When you look at pundits and their predictions, the correlation is zero. You have to trust the numbers. Don’t get distracted by all the things you think about plausibility.”

“It was an odd experience,” Arie Kapteyn said Wednesday morning.

The same might be said of the furor that surrounded the Daybreak poll during the campaign. It was the only major public survey that consistently showed Donald Trump winning. As a result, it drew frequent and loud denunciations from many Democrats, especially as election day neared and passions rose.

“What you think personally doesn’t matter. I thought Clinton would win. But that shouldn’t change the numbers.”

But on Wednesday, as many other pollsters struggled to explain why their surveys seemed blind to Trump’s support, Kapteyn and his colleagues were among the few who could say their work got the basic issue right.

“To be honest, I was surprised.”

“To be honest, I was surprised,” said Kapteyn, a USC economist and expert on public opinion. END_OF_DOCUMENT_TOKEN_TO_BE_REPLACED

“Look, this brings us back full-circle to where we started. The original question was: ‘Why does she have a private e-mail?’ She said convenience — obviously, that was ridiculous, she’s carrying around a whole lot of devices — it was obvious she was hiding something. Think about it: She set it up in 2009, before becoming secretary of state. So she anticipated having exchanges that she would not want anyone to see.”

“We have been asking ourselves on this set for a year almost, “What exactly didn’t she want people to see? Well now we know. As we speculated, the most plausible explanation was the rank corruption of the Clinton Foundation and its corrupt — I don’t know if it’s illegal, but corrupt relationship with the State Department. And her only defense, as we saw earlier, the Democrats are saying, ‘Well, there was nothing that she did — as in the Raytheon case — that was corrupted by donations.’ You can believe that if you want, there’s a reason that people give donations in large amounts. That’s to influence the outcome of decisions. We are getting unfolding to us exactly what she anticipated having to hide. And it’s really dirty business.”

What Nussbaum didn’t disclose in her dispatches: she contributed $250 to Democrat Hillary Clinton in April.

And Carole Simpson, a former ABC “World News Tonight” anchor who in 1992 became the first African-American woman to moderate a presidential debate, is not moderate about her personal politics: the current Emerson College distinguished journalist-in-residence and regular TV news guest has given Clinton $2,800.

Conventional journalistic wisdom holds that reporters and editors are referees on politics’ playing field — bastions of neutrality who mustn’t root for Team Red or Team Blue, either in word or deed.

But during this decidedly unconventional election season, during which “the media” has itself become a prominent storyline, several hundred news professionals have aligned themselves with Clinton or Trump by personally donating money to one or the other.

In all, people identified in federal campaign finance filings as journalists, reporters, news editors or television news anchors — as well as other donors known to be working in journalism — have combined to give more than $396,000 to the presidential campaigns of Clinton and Trump, according to a Center for Public Integrity analysis.

Nearly all of that money — more than 96 percent — has benefited Clinton: About 430 people who work in journalism have, through August, combined to give about $382,000 to the Democratic nominee, the Center for Public Integrity’s analysis indicates.

About 50 identifiable journalists have combined to give about $14,000 to Trump. (Talk radio ideologues, paid TV pundits and the like — think former Trump campaign manager-turned-CNN commentator Corey Lewandowski — are not included in the tally.)

END_OF_DOCUMENT_TOKEN_TO_BE_REPLACED

[See Mary Chastain’s article and the Twitter highlights at Breitbart.com]