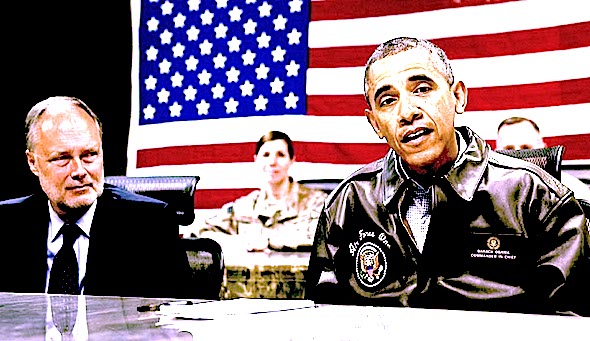 ‘Our society attaches privilege to being white and male and heterosexual.’

(Washington, DC) – Judicial Watch announced today that it obtained documents from the United States Department of the Army revealing that in April 2015, 400 soldiers in the 67th Signal Battalion at Fort Gordon, Georgia, were subjected to a “white privilege” briefing, including a PowerPoint presentation instructing the attendees: “Our society attaches privilege to being white and male and heterosexual …”

The slideshow also informed the soldiers: “Race privilege gives whites little reason to pay a lot of attention to African Americans.” It alleged that there are unspecified “powerful forces everywhere” keeping different kinds of people from being valued, accepted, and appreciated, but “we act as if it doesn’t exist.” This alleged privilege creates a “yawning divide” in income, wealth, and dignity.  The material described a mythical African woman who isn’t aware that she’s black until she comes to America, encounters “white racism” and discovers the U.S. is “organized according to race.”

The Department of the Army documents were obtained in response to a Freedom of Information Act (FOIA) request seeking:

Any and all materials used in an Equal Opportunity briefing provided on April 2, 2015, to the 67th Signal Battalion at Fort Gordon, Georgia, which included a discussion of “white privilege,” including but not limited to, handouts, PowerPoint presentations, audio/video tapes, course syllabi, and any recordings of the presentation itself.

Privilege exists when one group has something of value that is denied to others simply because of the groups they belong to, rather than because of anything they’ve done or failed to do.

Race privilege gives whites little reason to pay a lot of attention to African Americans or to how white privilege affects them. “To be white in American [sic] means not having to think about it” [Quotation not attributed]

Our society attaches privilege to being white and male and heterosexual regardless of your social class.

Imagine a school or a workplace where all kinds of people feel comfortable showing up. [sic] valued, accepted, supported, appreciated, respected, belonging. [sic] Something very powerful keeps this from us.

The truth of this powerful forces [sic] is everywhere, but we don’t know how to talk about it and so we act as though it doesn’t exist

The trouble we’re in privileges [sic] some groups at the expense of others.

It creates a yawning divide in levels of income, wealth, dignity, safety, health and quality of life.

Consider the “black woman” in Africa who has not experienced white racism and does not identify herself as a “black woman”.  African, a woman, but not black.

She only became “black” when she came to the U.S. where privilege is organized according to race, where she is assigned to a social category that bears that name and she is treated differently as a result. [Emphasis added]

The trouble we’re in can’t be solved unless the “privileged” make the problem of privilege their problem and do something about it.

The fact that it’s so easy for me and other people in dominant groups not to do this is the single most powerful barrier to change.

Though news of the indoctrination incident was briefly reported in Stars and Stripes shortly after it occurred, only one of the above slides previously has been made public.  Confronted with the information at the time, an Army spokesperson claimed the presentation was not officially sanctioned. END_OF_DOCUMENT_TOKEN_TO_BE_REPLACED 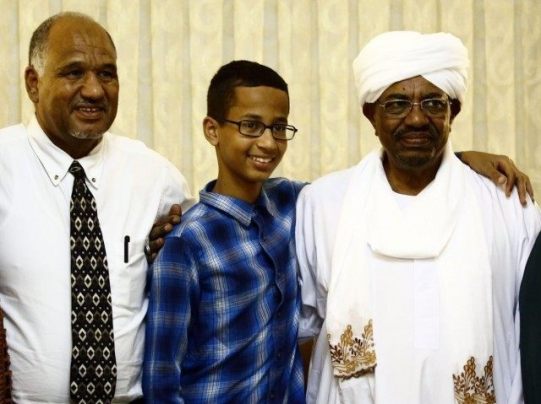 Neil Munro writes: Ahmed Mohamed, the Texas youth who was briefly detained Sept. 14 when he brought a clock-like device that looked like a bomb in to school, met with Sudan’s genocidal dictator Oct. 13.

That visit may prove embarrassing to President Barack Obama, whose science deputy personally invited the boy to an Oct. 19 science fair in the extended White House grounds.

Mohamed was invited to the White House after progressives and the media accepted and broadcast his claim that the arrest was prompted by unreasonable anti-Muslim and anti-African views supposedly prevalent among cops in Irving.

The boy’s hug for the genocidal Muslim theocrat prompted much criticism among his progressive supporters.

While we declared #IstandWithAhmed against institutional racism, Ahmed stands with #Bashir who institutes racism pic.twitter.com/STdC4aCBPm

On October 13, Ahmed, his sisters and his Sudan-born father flew out of Saudi Arabia into Sudan, a theocratic Muslim state that split into two states after waging a long war against Christian and tribal minorities in the south of the country.

It’s so genocidal that the International Criminal Court has posted a warrant for Bashir’s arrest. So theocratic that Bashir was Osama bin Laden’s host for several years. In March, Obama’s Secretary of State, John Kerry, posed for a photo with Bashir, to the displeasure of left-wing outlets. In a tweet, the Texas-born boy described Sudan as his “home.”

He also posted a vine of his arrival in the country. END_OF_DOCUMENT_TOKEN_TO_BE_REPLACED

“He got hit with a brick. We’re going to standby here. I can’t leave these officers here by themselves.”

BALTIMORE — Gina Cook reports:  When riots erupted in Baltimore in April, 150 cops were hurt as the city descended into chaos. Newly released video and radio transmissions are providing an additional viewpoint into just how confusing and tense it was for Baltimore Police.

“Hold the line! Do not go forward and do not chase them!”

Some of the audio makes it clear the leaders of the police department realized their officers were ill equipped for the escalating situation, Domen reports.

Surveillance video taken at the corner of North and Pennsylvania avenues shows the progression of the riots and looting.

The following video was obtained by the Baltimore Sun:

(NO AUDIO) City surveillance video obtained by The Sun shows the intersection of Pennsylvania and North avenues over the span of several hours on April 27, 2015. That intersection, one of several locations in Baltimore that saw disturbances that night in the wake of Freddie Gray’s death, became the epicenter for violence and protests for several days. (Baltimore Sun)

“Some of the audio makes it clear the leaders of the police department realized their officers were ill equipped for the escalating situation, Domen reports.” 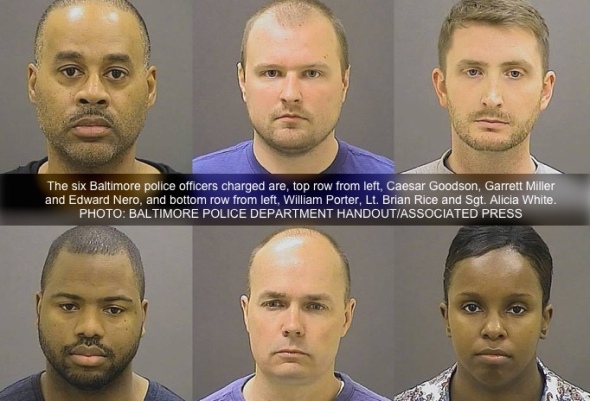 BALTIMORE—Scott Calvert, Kris Maher and Joe Palazzolo report:  Six city police officers were charged Friday in the death of Freddie Gray, a 25-year-old man who suffered fatal spinal injuries last month while in custody, a swift development in a case that has heightened the national focus on policing in black communities.

The announcement by State’s Attorney Marilyn Mosby, the city’s chief prosecutor, surprised many in a city where officials had cautioned for days that the investigation might not come to a quick resolution. Spontaneous celebrations broke out in some neighborhoods that were roiled by looting and violence after Mr. Gray’s funeral on Monday, while police union officials said they were disappointed in what they called a rush to judgment.

“These charges are an important step in getting justice for Freddie.”

The most serious charges were brought against Officer Caesar Goodson, who was driving a police transport van that brought Mr. Gray to a police station after his April 12 arrest. Mr. Goodson, 45 years old, was charged with second-degree murder, involuntary manslaughter and other charges. 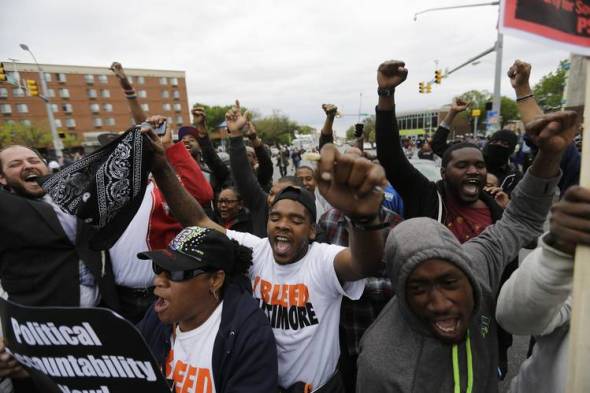 “I have never seen such a hurried rush to deliver criminal charges. We believe these officers will be vindicated as they have done nothing wrong.”

The officers surrendered to police and bail was set in amounts ranging from $250,000 to $350,000, according to court records and state officials. By Friday night, all six officers had posted bail and been released, according to public records. Like Mr. Gray, three of the officers, including Mr. Goodson, are African-American.

Mike Davey, a Baltimore attorney who represents Lt. Rice and said he was speaking for all six officers, said he thought the publicity surrounding the case had motivated the filing of charges, and that the officers would ultimately be cleared. END_OF_DOCUMENT_TOKEN_TO_BE_REPLACED

BALTIMORE— Colin Daileda writes: The man who recorded video of Baltimore police officers arresting Freddie Gray was himself arrested on Thursday, according to reports.

Kevin Moore, whose video of the arrest was widely circulated, said he has faced intimidation from police since April 12 when police apprehended Gray.

You can watch a discussion with Moore about his experience since recording the video, below.

Moore said officers had plastered his photo all over the Internet, saying they wanted to interview him.

Officers arrested Moore on Thursday night during a protest against police brutality in Baltimore. They released him later that evening, reportedly without revealing the charges. He didn’t receive a citation, either. END_OF_DOCUMENT_TOKEN_TO_BE_REPLACED

Nine adults and two juveniles were arrested between midnight and 3 a.m. for curfew violations, according to police.

Of the 201 people initially arrested, 106 have been released without criminal charges. The remaining 95 have been criminally charged, Capt. Kowalcyzk said.

Capt. Kowalcyzk says they continue to investigate video footage of those who have been released from custody in hopes of filing criminal charges in the future…(read more) 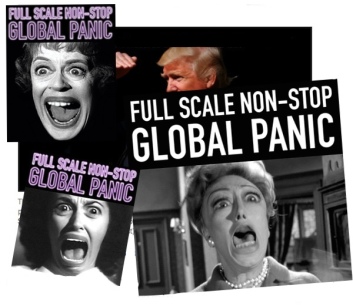 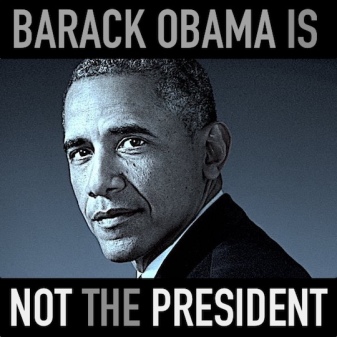 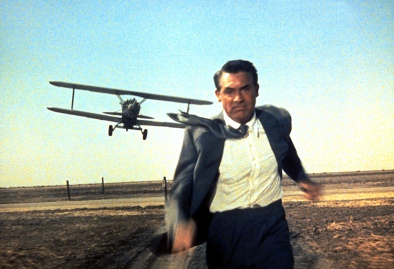 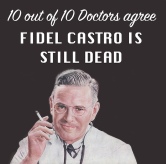