‘What Do They Want, a Cookie?’ CNN Didn’t DECIDE to Retract the Fake Russia Story, They Were FORCED To

Emily Smith reports: The specter of a $100 million libel suit scared CNN into retracting a poorly reported story that slimed an ally of President Trump’s — and forcing out the staffers responsible for it, The Post has learned.

This is why congratulating @CNN for firing offending staffers is silly. As Chris Rock says, what do they want, a cookie? https://t.co/XErZuJdaXS

Scaramucci got an unusual public apology but still hired a top Manhattan lawyer to put further pressure on CNN and “look after [his] interests in this matter,” one source said.

“They called them in and said they’d pay out their contracts, but they should leave immediately,” one source said.

Zucker was afraid of facing a high-profile suit from Scaramucci while the US Justice Department weighs the proposed $85.4 billion media merger.

Meanwhile, a CNN insider said staffers are furious at “having lost the moral high ground because of this story.” Sources said Zucker tried to rally his staff during a Tuesday morning conference call.

“Zucker stressed that this issue was a ‘lapse in editorial standards’ and said it was a lesson to all reporters and editors to continue to strive for strong, accurate reporting,” a source said. END_OF_DOCUMENT_TOKEN_TO_BE_REPLACED 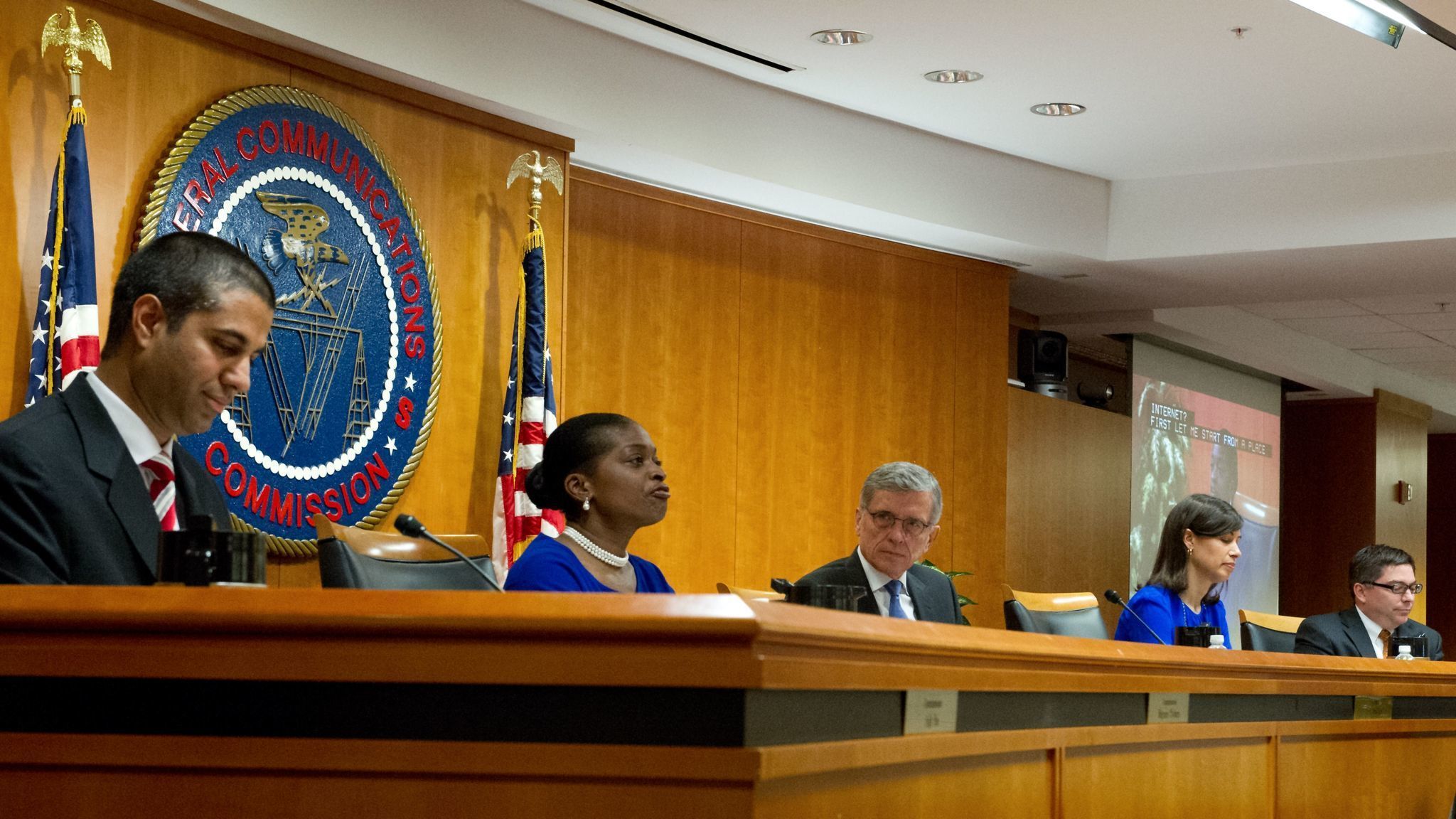 A telecommunications lawyer who has served on the FCC since May 2012, Pai is a free-market advocate who has been critical of new regulations adopted by Democrats in recent years.

President Trump on Monday  designated Ajit Pai, a Republican member of the Federal Communications Commission and an outspoken opponent of new net neutrality rules, to be the agency’s new chairman.

“I look forward to working with the new administration, my colleagues at the commission, members of Congress, and the American public to bring the benefits of the digital age to all Americans.”

Pai, 44, would take over for Tom Wheeler, a Democrat who stepped down on Friday. Wheeler’s term had not expired but Trump gets to designate a new chairman as Republicans gain the FCC majority.

“We need to fire up the weed whacker and remove those rules that are holding back investment, innovation and job creation.”

“I look forward to working with the new administration, my colleagues at the commission, members of Congress, and the American public to bring the benefits of the digital age to all Americans” Pai said.

A telecommunications lawyer who has served on the FCC since May 2012, Pai is a free-market advocate who has been sharply critical of new regulations adopted by Democrats in recent years.

He takes the chairman’s office amid reports that Trump’s advisors want to scale back the FCC’s authority.

“We need to fire up the weed whacker and remove those rules that are holding back investment, innovation and job creation,” Pai said in a speech last month looking ahead to Republican control of the FCC.

Pai, whose parents immigrated to the U.S. from India, was associate general counsel of Verizon Communications Inc. from 2001-03 before working as a staffer at the U.S. Senate, the Justice Department and the FCC.

He sprinkles his speeches with pop-culture references and is adept at social media. During the net neutrality debate, he tweeted a photo of himself with the 332-page proposal and lamented that FCC rules didn’t allow him to make it public. Pai has pushed for FCC proposals to be released before commissioners vote on them.

[REWIND] The Pros and Cons of ‘HBO Now’

Back in September, there was plentiful speculation about HBO’s rumored streaming-only service. Now that the service is here, how did the speculation stack up to the reality? Here’s a trip back to some of those early predictions.

Sept. 16, 2014, Chris Osterndorf writes: For TV junkies of the Internet age, the promised land may be on the horizon. That’s right, HBO may start offering streaming-only service

Speaking at an investment conference earlier this week, Time Warner CEO Jeff Bewkes said that the company is “seriously considering what is the best way to deal with online distribution.” For the many who have been pushing HBO to package HBO GO as a separate entity for awhile now, this is no small statement. And with Netflix marching ever forward to corner the streaming market, this could be a crucial moment for HBO.

Yet offering HBO GO without a subscription to HBO presents a number of difficult questions. While it’s undoubtedly a tantalizing possibility, there are as many challenges inherent in this scenario as there are benefits.

Pro: Easier for “Cord Cutters” and Millennials to Watch Their Favorite Shows

Offering HBO GO sans HBO already gels with the way a large number of millennials watch television. According to newfound data, this is a demographic that ingests three times more TV online than their older counterparts.

These millennials are often lumped in as part of a larger group that’s been dubbed “cord cutters,” aka people who’ve dumped cable entirely to watch television through the Internet. And they’re a group that’s growing. A study that came out in June found that 2.9 percent of pay-TV consumers in this country are planning on canceling their cable service and joining the ranks of the cord cutters in the next year. This doesn’t sound like much until you take into account that this number is up from 2.7 percent last year, which was up from 2.2 percent the year before that, indicating American cord cutters are rising steadily.

Together, as millennials and cord cutters reject cable, they are changing the face of American television. HBO GO becoming its own service would be a huge victory for them, and for the shifting trends they represent.

However, offering HBO GO separately from HBO could come at a price. Because for now, HBO, and all the content they provide, are still very much entrenched in a classic model of distribution.

When viewers first started to clamor for standalone HBO GO accounts several years ago, Ryan Lawler at TechCrunch observed, “HBO currently has about 29 million subscribers and reportedly receives around $7 or $8 per subscriber per month. So HBO could, theoretically, get more per subscriber than it’s currently making. But that doesn’t include the cost of infrastructure needed to support delivery of all those streams, including all the CDN delivery and other costs that would come with rolling out a broader online-only service.”

He continues, “More importantly, it wouldn’t include the cost of sales, marketing, and support—and this is where HBO would really get screwed. Going direct to online customers by pitching HBO GO over-the-top would mean losing the support of its cable, satellite, and IPTV distributors. And since the Comcasts and the Time Warner Cables of the world are the top marketing channel for premium networks like HBO, it would be nearly impossible for HBO to make up for the loss of the cable provider’s marketing team or promotions.”

What does this ultimately mean for you, the consumer? In short, it means that if HBO suffers, their output also suffers.

So far, HBO is doing just fine in their fight against Netflix. Of course, they’re not able to provide the same wide array of movies and TV shows from other networks, but they’re as prestigious as ever, and they have several huge hits on their hands. In fact, Game of Thrones just surpassed The Sopranos to become their highest rated show ever. END_OF_DOCUMENT_TOKEN_TO_BE_REPLACED

“while I was pleased with several of Comcast-NBC’s voluntary public interest commitments, more can be done to achieve our diversity objectives.”

For Variety, Ted Johnson reports: Rep. Maxine Waters (D-Calif.) and 51 other lawmakers, including members of the Congressional Black Caucus, are pressing the FCC to ensure that upcoming mergers include  “enforceable commitments” to boost media ownership, programming, advertising and other opportunities for women and minorities.

“In similar ‘mega-merger’ transactions in recent years, companies have attempted to demonstrate their ‘good corporate citizenship’ by identifying past philanthropic donations they have made to various charitable organizations and promising additional such donations.”

The letter cited the proposed mergers of Time Warner Cable and Comcast, and of AT&T and DirecTV, as well as “the imminent announcement” of Sprint’s merger with T-Mobile. The FCC’s merger reviews examine whether the transactions are in the public interest. END_OF_DOCUMENT_TOKEN_TO_BE_REPLACED