OH YES SHE DID: Teacher ‘Baby Boo’ Sara Domres Admits to Sex with 16-Year-Old, Sent Him Selfies During Her Honeymoon

“Investigators found evidence on Domres’ phone of the two referring to each other as ‘baby boo.”

Sara Domres, 28, pleaded guilty Thursday to two counts of sexual assault of a student by school staff, both felony charges. She will be sentenced on September 30.

According to court documents, the relationship between Domres and the 16-year-old male student began during the 2014-2015 school year. A criminal complaint states that the victim was in an English class taught by Domres, and the two “became friends and began to text each other a lot.”

“On the same day that her husband had his bachelor party during the 2015-2016 school year, Domres had sex with the boy at the Motel 6.”

Investigators found evidence on Domres’ phone of the two referring to each other as “baby boo.” Texts read, “I love you!” and, “You’re extremely attractive to me!!!”

“The two also allegedly had sex at the Park and Ride on Moorland Road in New Berlin in July 2015.”

On the same day that her husband had his bachelor party during the 2015-2016 school year, Domres had sex with the boy at the Motel 6 off of Bluemound Road in the Town of Brookfield, according to court documents.

The two also allegedly had sex at the Park and Ride on Moorland Road in New Berlin in July 2015.

Investigators were able to confirm the victim’s phone had been connected to the hotel’s Wi-Fi, and Domres “paid cash” for the room. END_OF_DOCUMENT_TOKEN_TO_BE_REPLACED

WAR ON COPS: Police Searching for Suspects After Cop Shot and Killed in Chicago Suburb

Officer died at scene, found without his gun, equipment

AWR Hawkins reports: According to CBS Chicago, “Lake County Sheriff’s Det. Chris Covelli said, around 7:50 a.m., the officer radioed he was pursuing three suspects, after looking into their ‘suspicious activity.’ Police lost radio contact with the officer, who was later found with a gunshot wound.”

Police indicate that the trio consists of two white males and one black male. CBS Chicago points to “unconfirmed reports” that the trio may have taken the fallen “officer’s gun and pepper spray.”

The manhunt appears to be centered “on a marshy area off Rainier Way and Rollins Road.” END_OF_DOCUMENT_TOKEN_TO_BE_REPLACED

An 11-year-old girl in China was beaten to death by her father for copying a classmate’s homework, state-run media said on Wednesday.

The man “ordered the girl to kneel down, tied her hands and beat her”, the official Xinhua news agency reported.

The father took her to hospital after she stopped breathing but she died the next day, Xinhua said.

Doctors at the hospital in Hangzhou found bruises and injuries on the girl’s neck and back and signs she had been choked for as long as five minutes, the Xiandai Jinbao said.

The incident is the latest in a series of child abuse incidents in China that have drawn widespread outrage. END_OF_DOCUMENT_TOKEN_TO_BE_REPLACED

A mother is furious after being banned from a Hepzibah, Georgia elementary school several weeks ago, which she says stemmed from her posting a picture on Facebook of her concealed weapons permit, WRDW reports.

“I feel like a criminal. I want to be heard. I want a public apology,” Tanya Mount said.

Mount said she was issued a criminal trespass warning last week by the Richmond County Board of Education police. But when she asked what she did wrong, she received an unexpected response.

END_OF_DOCUMENT_TOKEN_TO_BE_REPLACED

From the Department of Petty Controversies: Schools Cancel Halloween

Of all the conflicts to roil our educational system, this one is pretty absurd

Nick Gillespie writes:  In the latest example of small-mindedness plaguing our educational system, schools around the country are attempting to ban costumes and candy on what is surely one of most kids’ favorite days of the year. The excuses range from vague concerns about “safety” to specific worries about food allergies to—get this—fears of breaching the wall of separation between church and state.

But whatever the motivation, the end result is the same as what Charlie Brown used to get every time he went trick-or-treating: a big old rock in the candy bag. What sort of lesson are we teaching our kids when we ban even a tiny, sugar-coated break in their daily grind (or, even worse, substitute a generic, Wicker Man-style “Fall Festival” for Halloween)? Mostly that we are a society that is so scared of its own shadow that we can’t even enjoy ourselves anymore. We live in fear of what might be called the killjoy’s veto, where any complaint is enough to destroy even the least objectionable fun.

Consider Sporting Hill Elementary School in Pennsylvania. Earlier this month, the school sent parents a note explaining that wearing Halloween costumes was was canceled because, well, you know, “safety is a top priority.” A spokesperson further explained, “We recognize that the education about, and celebration of, seasonal festivals is an important aspect of the elementary setting…[but] we must do so in a manner that is safe and appropriate for all children.” You’d think it would be easy enough to craft basic guidelines on what’s safe – only fake blood, no trailing ghost or ghoul fronds that might get tripped on– but such a simple task is apparently beyond the powers that be in Sporting Hill. END_OF_DOCUMENT_TOKEN_TO_BE_REPLACED 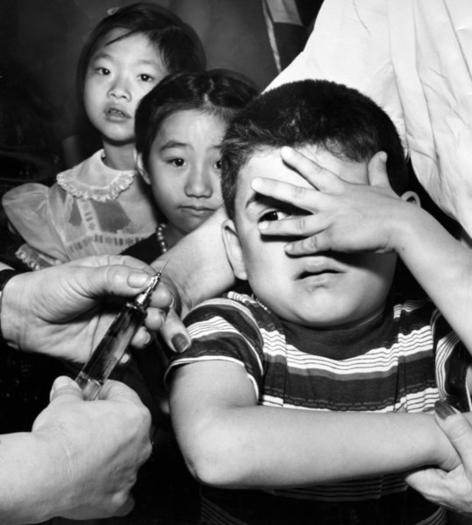 END_OF_DOCUMENT_TOKEN_TO_BE_REPLACED

An elementary school will hold a toy gun exchange Saturday, offering students a book and a chance to win a bicycle if they turn in their play weapons.

“Playing with toy guns, saying ‘I’m going to shoot you,’ desensitizes them, so as they get older, it’s easier for them to use a real gun,” Hill said.

If Hill’s implicit conviction that a child cannot learn to distinguish between a real gun and, say, this, is true, then we have a lot bigger problems than some after-school cowboys-versus-Indians.

5 Facts About Guns, Schools, And Violence