Assange has not returned a series of recent emails from Fox News about Rich. MacFadyen, who was considered a mentor by Assange, died of lung cancer on Oct. 22 at age 76.

D.C. police have announced a $25,000 reward for information leading to the conviction of Rich’s killer. Republican lobbyist Jack Burkman has offered a separate $130,000 reward.

Rich had been at Lou’s City Bar a couple of miles from his home until about 1:15 a.m. He walked home, calling several people along the way. He called his father, Joel Rich, who he missed because he had gone to sleep. He talked with a fraternity brother and his girlfriend, Kelsey Mulka.

Around 4:17 a.m., Rich was about a block from his home when Mulka, still on the phone with him, heard voices in the background. Rich reassured her that he was steps away from being at his front door and hung up.

Two minutes later, Rich was shot twice. Police were on the scene within three minutes. Rich sustained bruising on his hands and face. He remained conscious, but died at a nearby hospital less than two hours later. END_OF_DOCUMENT_TOKEN_TO_BE_REPLACED

“This is a sham, your company isn’t real, your website is fake, the claims you have made are lies, this is a hoax.” Carlson said. “Let me start at the beginning, however, with your name, Dom Tullipso, which is not your real name.

It’s a fake name, we ran you through law enforcement-level background checks and that name does not exist. So let’s start out with the truth. Tell me what your real name is.”

While “Dom” never conceded that anything about Demand Protest was a hoax, he admitted that the group had a change of heart and will be protesting the anti-Trump protesters. 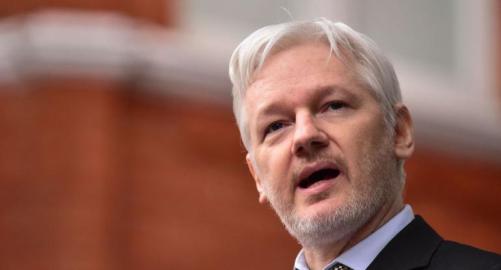 Assange may be deliberately stoking anticipation about the announcement.

…The hacking group WikiLeaks has cancelled a highly anticipated announcement set for Tuesday due to “security concerns.”

The announcement was set to be made…(read more)

Wikileaks has abruptly canceled a much-anticipated announcement on Tuesday, according to NBC News. The announcement had been expected to be founder Julian Assange’s long-promised document dump on Hillary Clinton. NBC’s Jesse Rodriguez reported that the Tuesday announcement — which was to come from the balcony of London’s Ecuadorian Embassy, where Assange has sought sanctuary for years – was canceled due to “security concerns”.

Wikileaks has not said when it will now make its “announcement”.

Assange appeared on Fox News last month, repeating his assertion that Wikileaks has damaging documents on Clinton and suggested…(read more)

“Security concerns”? In the middle of London? Assange may be deliberately stoking anticipation about the announcement. Or, he may fear for his life..(read more)

END_OF_DOCUMENT_TOKEN_TO_BE_REPLACED

Allum Bokhara writes: The hugely popular link-sharing site is in a state of virtual lockdown after the volunteers who run some of the site’s biggest communities (known as “subreddits”) went on the digital equivalent of a general strike. This followed the sacking of Victoria Taylor, a popular site admin, after a Reddit Q&A with the Rev. Jesse Jackson went badly for the activist preacher.

“The collective shutdown has rendered Reddit virtually unusable. In the space of a single evening, over 100 subreddits with tens of millions of subscribers have gone dark.”

High-traffic subreddits dedicated to movies, gaming, videos, history, science and art have been voluntarily locked by their moderators as an act of protest against the decision, which they saw as a symptom of an increasingly overbearing management that takes its users and volunteer moderators for granted.

“It’s another blow for interim Reddit CEO Ellen Pao, with users dubbing her ‘Chairman Pao’ ever since the June crackdown.”

The collective shutdown has rendered Reddit virtually unusable. In the space of a single evening, over 100 subreddits with tens of millions of subscribers have gone dark. Users are now flocking to Reddit’s competitors, such as Frizbee and Voat, the latter of which is struggling to accommodate its latest spike in traffic.

This is not the first time Reddit has seen a revolt against its management. Around mid-June, users waged a week-long rebellion against the site management after Reddit shut down a number of “politically incorrect” subreddits. But this is the first time that so many big moderators have simultaneously shut down their subreddits.

It’s another blow for interim Reddit CEO Ellen Pao, with users dubbing her “Chairman Pao” ever since the June crackdown.

The current revolt was triggered by the sacking of Victoria Taylor, a veteran administrator on the site who specialized in arranging high-profile Reddit Q&As, known as “Ask Me Anything” or “AMA” sessions. Ask Me Anythings are probably Reddit’s best-known feature and are known for featuring world-famous guests including Barack Obama, Sir Tim Berners-Lee and Julian Assange. END_OF_DOCUMENT_TOKEN_TO_BE_REPLACED