Devin Coldewey reports: Robots have been a major focus in the technology world for decades and decades, but they and basic science, and for that matter everyday life, have largely been non-overlapping magisteria. That’s changed over the last few years, as robotics and every other field have come to inform and improve each other, and robots have begun to infiltrate and affect our lives in countless ways. So the only surprise in the news that the prestigious journal group Science has established a discrete Robotics imprint is that they didn’t do it earlier.

Editor Guang-Zhong Yang and president of the National Academy of Sciences Marcia McNutt introduce the journal:

In a mere 50 years, robots have gone from being a topic of science fiction to becoming an integral part of modern society. They now are ubiquitous on factory floors, build complex deep-sea installations, explore icy worlds beyond the reach of humans, and assist in precision surgeries… END_OF_DOCUMENT_TOKEN_TO_BE_REPLACED

Japanese engineers have accepted a challenge from an American company to duel with giant robots.

A harmonious union between natural drawing and digital technology has been one of the most elusive challenges, one of the computer revolution’s great disappointments. What happened? It didn’t happen. Most efforts to make this work have been somewhat interesting, but ultimately, fall short. We expected better. Does isketchnote break the barrier? Good question. I haven’t had an opportunity to test it, but based on this early edition, it’s definitely worth closer examination. Here’s a few comments:

Got my kickstarter Isketchnote device by iskn. This device digitizes your artwork on any piece of paper or sketchbook that fits in the black area of the digitizer. It digitizes the sketch and draws it on the iPad in real time. You can replay the sketch as it creates an animation or save the sketch. Handy device if you need your work digitized right away so you can later finish it on the computer. Great for digitizing notes as well…

In an entertaining review at Rocketnews24, Scott Wilson writes:

iSketchnote started as a Kickstarter project by the French group ISKN in September 2013, and it quickly exceeded its modest $35,000 goal by hitting $350,000. Now, a little over a year later, it’s finally being released to the public as an alternative digital-drawing tablet. In fact it’s not even a tablet at all; it’s just a “slate” and a pen. You can put any kind of paper that you want on top of the slate, write away with the special pen, and watch your writing or drawing get turned into a digital version in real-time via Bluetooth or USB to your tablet or PC….(read more)

At the start of start of the video you see me touching the ipad. I am adjusting the opacity of the lines that will appear on the ipad and the size. I lowered the opacity to around 40% as I go over my lines a lot so it matches my real media art style best. END_OF_DOCUMENT_TOKEN_TO_BE_REPLACED

Is That a Drone in your Pocket, or Are You Just Happy to See Me: Meet the Pocket Drone

That? Oh, that’s just a mosquito, now tell me more about your top secret project.

Do you ever feel frustrated that you can’t keep tabs on your significant other at all times? Nervous that everyone is hanging out without you? Curious about what the heck your neighbors are doing over there?

Thankfully, there’s a Pocket Drone currently being funded on Kickstarter that will solve these problems and more. It only takes 20 seconds to unpack and launch. Then, you can load it up with any video camera you own, as long as the payload is less than half a pound. Hit record and you’re off, creating surveillance footage of everyone you know.

Control Pocket Drone with an app on your phone or tablet, and you can access hard-to-reach places like the café where that hot neighbor you’ve been Facebook stalking gets his coffee every morning.

END_OF_DOCUMENT_TOKEN_TO_BE_REPLACED

Giuseppe Macri  writes:  The Drone User Group Network unveiled the latest — and smallest — in drone technology at the 2014 Consumer Electronics Show Wednesday night, the Pocket Drone, which surpassed its Kickstarter funding goal by more than $20,000 overnight.

Pocket Drone is a small multi-copter drone designed to carry high-quality cameras and shoot aerial footage, and can collapse into a transportable size smaller than a seven-inch tablet.

After debuting at CES Wednesday night, the project achieved its Kickstarter funding goal of $30,000 and was sitting at almost $60,000 as of Thursday afternoon, with 58 days of fundraising left to go.

END_OF_DOCUMENT_TOKEN_TO_BE_REPLACED

TechCrunch‘s Greg Kumparak writes:  Remember that night when you and your friends discovered how to “draw” with your camera’s long exposure function?

You started out simple, piercing the dark with a cheap handheld flashlight as you traced a terrible rendition of your name through the air. You were hardly halfway through the last letter of your name before you were running over to the camera to see if it worked. You, like many a bored digital camera owner before you, had discovered light painting.

As its name implies, Pixelstick is… a stick of pixels

More specifically, the Pixelstick is a 6’ bar containing 198 full color LEDs. At the core of Pixelstick is a simple brain: a handheld controller, an SD card reader, and a bit of lightweight circuitry to parse images pulled from the card.

END_OF_DOCUMENT_TOKEN_TO_BE_REPLACED

Here’s a video of Woojer’s Naimer pitching the concept earlier this year:

Natasha Lomas reports: Woojer is a wearable mobile accessory designed to allow its wearer to feel what they’re listening to on their mobile device — via the medium of haptic feedback — rather than simply having banging tunes inserted into their earholes. It’s also being aimed at gamers who want a more immersive in-game experience, or for watching movies or other audiovisual content on a mobile device.

The Israel-based startup behind Woojer, which closed a $600,000 angel round earlier this year, has been developing the product since the start of 2011. It currently has a working prototype — and plans to launch a Kickstarter campaign next month to raise funding for an initial production run. If that’s successful, they hope to ship to backers in early Spring 2014.

How exactly does Woojer work? Its creators describe it as a “tactile transducer” that reproduces sound as a polyphonic vibration, allowing a haptic, noiseless element to augment the standard stereo audio the user hears via their own headphones (which plug into the Woojer box via a 3.5mm headphone jack).

Unlike some of the rival offerings in this space, such as subpac and bassAware Holster, Woojer doesn’t require the user to strap on some form of backpack or wear a special headset. (Or look like they buy all their clothes at Cyberdog.) Instead, the roughly matchbox-sized box is clipped to clothing so it rests against the body. Its low frequency vibrations then create a physical bass sensation — similar to hearing live music at a concert or cinema surround sound. Or that’s the theory. END_OF_DOCUMENT_TOKEN_TO_BE_REPLACED

Now in the closing few days of its Kickstarter campaign the Pixy camera board from Carnegie Mellon is an interesting departure from cameras intended to be connected to micro-controllers like the Arduino. It isn’t just another camera, it’s a “smart” vision sensor. END_OF_DOCUMENT_TOKEN_TO_BE_REPLACED 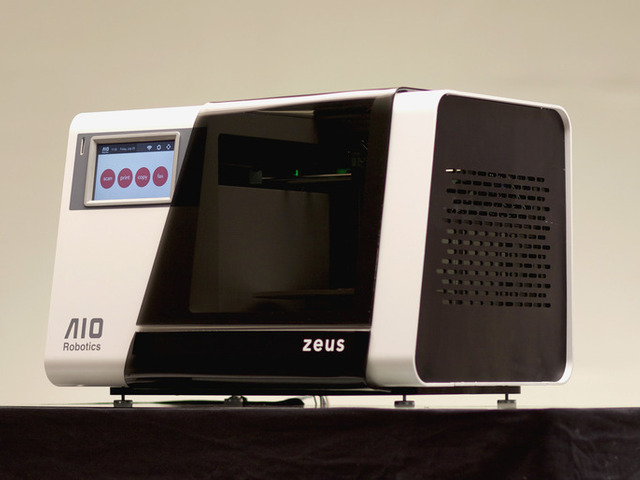 Meet AIO Robotics‘ Zeus “3D copy device”: a 3D printer, 3D scanner and 3D object faxing machine that’s blasted past its $100,000 Kickstarter funding goal after about a day on the crowdfunding trail. This hybrid box is on a mission to consumerise 3D printing by converging multiple functions and taking away some of the rough, manual edges.