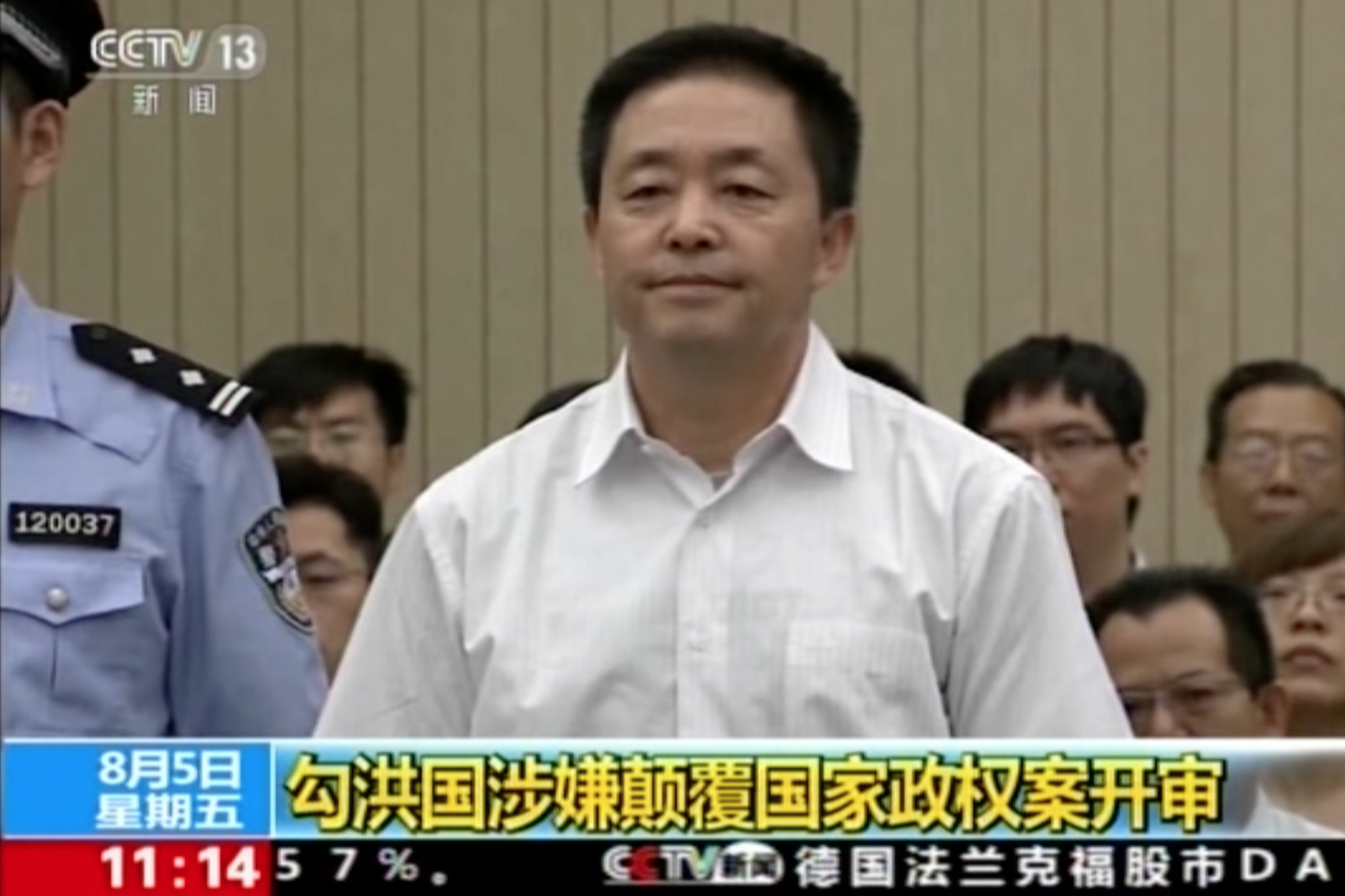 Since Xi Jinping came came to power nearly four years ago, hundreds of activists, lawyers, writers, publishers and employees of nongovernmental groups have been rounded up. Many more have been threatened and intimidated. Internet news sites have been ordered to stop publishing reports from sources that aren’t sanctioned by the state.

Julie Making reports: For five days last week, the confessions poured forth from Chinese human rights activists and attorneys rounded up last summer and held incommunicado for a year. Four men, facing trial for subversion, cowered before a court where they were represented by lawyers they didn’t choose.

A fifth person, knowing her husband was detained and teenage son under surveillance, declared her wrongs in a videotaped interview.

“As an old timer who’s been studying China since the Mao era, I have to say it’s the worst I’ve seen since then. It’s very discouraging.”

China is in the midst of what many overseas scholars say is its harshest crackdown on human rights and civil society in decades. Since Xi Jinping came came to power nearly four years ago, hundreds of activists, lawyers, writers, publishers and employees of nongovernmental groups have been rounded up. Many more have been threatened and intimidated. Internet news sites have been ordered to stop publishing reports from sources that aren’t sanctioned by the state.

“I want to remind everybody to wipe their eyes and clearly see the ugly faces of hostile forces overseas. Never be fooled by their ideas of ‘democracy,’ ‘human rights’ and ‘benefiting the public.’”

— Zhai Yasmin, one of the defendants

Even as China has been touting its efforts to boost the “rule of law,” some critics of the government have vanished under mysterious circumstances in places like Thailand and Hong Kong, only to surface months later in Chinese custody, claiming rather unbelievably they had turned themselves in voluntarily. Many of those detained have appeared on state-run TV confessing to crimes before they have had a day in court.

“Xi likes to underscore his status as the new Mao Tse-tung by not giving a damn about what the major Western leaders, authors or media are saying about China.”

— Willy Lam, a scholar at the Chinese University of Hong Kong

“As an old timer who’s been studying China since the Mao era, I have to say it’s the worst I’ve seen since then,” said Susan L. Shirk, chair of the 21st Century China Program at UC San Diego. “It’s very discouraging.”

The activists and lawyer prosecuted last week confessed to having illegally organized protests and drawn attention to sensitive cases at the behest of “foreign forces” in order to “smear the [Communist] party and attack the Chinese government.” They had erred in accepting interviews with international journalists, they added, and traveled abroad to participate in interfaith conferences and law seminars infiltrated by separatists and funded by enemies of China. END_OF_DOCUMENT_TOKEN_TO_BE_REPLACED

In Britain, if you have extreme views on anything from Western democracy to women’s role in public life, you might soon require a licence from the government before you can speak in public. Seriously.

“It’s the brainchild of Theresa May, the Home Secretary in David Cameron’s government. May wants to introduce ‘extremism disruption orders’, which, yes, are as terrifyingly authoritarian as they sound.”

Nearly 350 years after us Brits abolished the licensing of the press, whereby every publisher had to get the blessing of the government before he could press and promote his ideas, a new system of licensing is being

proposed. And it’s one which, incredibly, is even more tyrannical than yesteryear’s press licensing since it would extend to individuals, too, potentially forbidding ordinary citizens from opening their gobs in public without officialdom’s say-so.

“Once served with an EDO, you will be banned from publishing on the Internet, speaking in a public forum, or appearing on TV. To say something online, including just tweeting or posting on Facebook, you will need the permission of the police.”

It’s the brainchild of Theresa May, the Home Secretary in David Cameron’s government. May wants to introduce “extremism disruption orders”, which, yes, are as terrifyingly authoritarian as they sound.

Last month, May unveiled her ambition to “eliminate extremism in all its forms.” Whether you’re a neo-Nazi or an Islamist, or just someone who says things which betray, in May’s words, a lack of “respect for the rule of law” and “respect for minorities”, then you could be served with an extremism disruption order (EDO). END_OF_DOCUMENT_TOKEN_TO_BE_REPLACED

A Small President on the World Stage

Peggy Noonan writes: The world misses the old America, the one before the crash—the crashes—of the past dozen years.

That is the takeaway from conversations the past week in New York, where world leaders gathered for the annual U.N. General Assembly session. Our friends, and we have many, speak almost poignantly of the dynamism, excellence, exuberance and leadership of the nation they had, for so many years, judged themselves against, been inspired by, attempted to emulate, resented.

As for those who are not America’s friends, some seem still confused, even concussed, by the new power shift. What is their exact place in it? Will it last? Will America come roaring back? Can she? Does she have the political will, the human capital, the old capability?

It is a world in a new kind of flux, one that doesn’t know what to make of America anymore. In part because of our president.

“We want American leadership,” said a member of a diplomatic delegation of a major U.S. ally. He said it softly, as if confiding he missed an old friend. END_OF_DOCUMENT_TOKEN_TO_BE_REPLACED