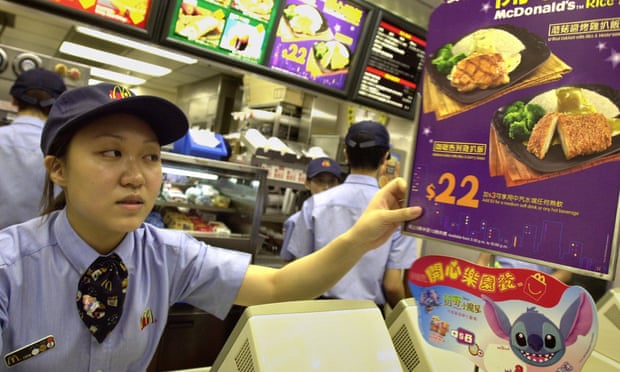 Woman aged between 50 and 60 entered the restaurant 24 hours earlier, but police were not called for several hours.

A homeless woman lay dead at a Hong Kong McDonald’s restaurant for hours surrounded by diners before authorities were called.

The woman, aged between 50 and 60, was found dead on Saturday morning and has been held up as an example of the growing number of homeless people who seek shelter in 24-hour restaurants.

“We endeavour to support street sleepers to enhance their self-reliance…the subject is a complex social problem.”

“Officers arrived upon a report from a female customer [that a person was found to have fainted],” said police in a statement.

Local media said the woman was slumped at a table, 24 hours after she first entered the restaurant in the working class district of Ping Shek.

She had not moved for seven hours before fellow diners noticed something was wrong, according to Apple Daily, citing CCTV footage.

The woman was thought to have regularly spent nights in the McDonald’s, said the South China Morning Post. END_OF_DOCUMENT_TOKEN_TO_BE_REPLACED

HONG KONG— For WSJ, Kate O’Keeffe & Yvonne Lee report: China’s international financial hub, located a quick ferry ride from the world’s casino capital, has seen a throng of gambling companies rush to its equity markets over the past year.

“The Asia gaming industry should be one of the fastest-growing sectors in the next decade.”

Since July 2013, at least six casino and VIP gambling companies have unveiled plans to list in Hong Kong, often through so-called backdoor listings. These companies are either hoping to raise funds to expand abroad or to bolster business at home in Macau at a time when the enclave’s $45 billion gambling market is suffering its first revenue declines in five years.

Most recently, Nasdaq-listed Iao Kun Group Holdings Co. last month filed a formal listing application to go public “by introduction,” where no new funds are raised, hiring Rothschild (Hong Kong) Ltd. as its sponsor. The company is part of Macau’s junket industry, which brings high-spending gamblers from mainland China to Macau, issues them credit and collects players’ debts in exchange for commissions from casinos. END_OF_DOCUMENT_TOKEN_TO_BE_REPLACED

Supreme Quality Red Devil Firecrackers: Do Not Hold In Hand After Lighting!

This 92-year-old Tycoon is Building a Versailles Casino.

SJM Holdings, the casino company founded by billionaire Stanley Ho, broke ground this week in Macau on a three hotel, 2,500 room casino complex that is modeled after Louis XIV’s Palace of Versailles.

The Lisboa Palace will have 700 gambling tables, a wedding complex and three hotels, including one designed with Italy’s Gianni Versace fashion house. SJM Holdings managing director Angela Leong, one of Ho’s four wives, was inspired to include a Versace hotel in the complex after staying at a Palazzo Versace in Australia in 2003 (she was there to escape the SARS outbreak).

The project will cost $3.9 billion, SJM executives said, and will include opulent interiors inspired by the Louvre and the Casino at Monte Carlo.