“There’s rumors that they actually were right-wingers. They were a part of a kind of group that was organized and ready to create the kind of tumult and danger you saw that forced the police to cancel the event … I wouldn’t bet against it. I saw these people. They all looked very– almost paramilitary.”

“I was there for part of last night, and I know what I saw and those people were not Berkeley students,” Reich said. “Those people were outside agitators. I have never seen them before.”

“They were not from the campus. I don’t want to say factually, but I’ve heard …”

“There’s rumors that they actually were right-wingers. They were a part of a kind of group that was organized and ready to create the kind of tumult and danger you saw that forced the police to cancel the event,” Reich insisted. “So Donald Trump, when he says Berkeley doesn’t respect free speech rights, that’s a complete distortion of the truth.”

“… I’ve heard there was some relationship here between these people and the right wing and the right-wing movement that is affiliated with Breitbart News.”

…Reich proposed that a shadowy group of right-wingers posing as left-wing “anti-fascist” belligerents were responsible. “There’s rumors that they actually were right-wingers,” he suggested. “They were a part of a group that were organized and ready to create the kind of tumult and danger you saw that forced the police to cancel the event.”

Applying the classic tactic of the demagogue, Reich abandoned all journalistic standards with his use the phrase, “there’s rumors.” Moreover, he made a faint appeal to his own on-the-scene reporting by saying, “I was there for part of last night, and I know what I saw, and those people were not Berkeley students.” Of course, it has been widely reported that the “black bloc” rioters were indeed from outside the university, and that they were exploiting the campus event to advance their anti-capitalist “resistance.” They have no connection to Breitbart.

Reich went on: “And I’ve heard — again, I don’t want to say factually, but I’ve heard there was some relationship here between these people and the right wing and the right-wing movement that is affiliated with Breitbart News.” END_OF_DOCUMENT_TOKEN_TO_BE_REPLACED

A planned talk at the University of California-Berkeley by polarizing Breitbart News editor Milo Yiannopoulos was canceled Wednesday evening after protesters threw smoke bombs and flares at the student union building where he was scheduled to speak.

“Violent left-wing protesters stormed the building and forced me to be evacuated by police and by my security detail,” Yiannopoulos told Fox News‘ Tucker Carlson in a phone interview from an undisclosed location.

There were no immediate reports of any injuries or arrests.

Yiannopoulos, 32, is a vocal supporter of President Donald Trump and a self-proclaimed internet troll whose comments have been criticized as racist, misogynist, anti-Muslim and white supremacist.

The decision to cancel was made two hours before the start of the event because a crowd of more than 1,500 people had gathered outside the venue, the university said in a statement.

“We condemn in the strongest possible terms the violence and unlawful behavior that was on display, and deeply regret that those tactics will now overshadow the efforts to engage in legitimate and lawful protest against the performer’s presence and perspectives,” the statement read, in part.

Hundreds of peaceful demonstrators carrying signs that read “Hate Speech Is Not Free Speech” had been protesting for hours before the event.

In the evening, a small group dressed in black broke windows, threw smoke bombs and flares, and set a large bonfire outside the building. Some members of that group were wearing hooded sweatshirts.

The demonstrators were met by tight security in the form of law enforcement armed in riot gear. Some rioters broke windows and lit fireworks, while others pulled away the metal barricades in front of the building.

A shelter in place order was in effect and the Cal campus was placed on lockdown. END_OF_DOCUMENT_TOKEN_TO_BE_REPLACED

If you really want to crush Milo, or anyone in the audience-building business, ignore him. He prays day and night for drama like this.

Berkeley does not appear to be a safe space for free speech. #miloatcal https://t.co/nURg5RHgT1

Key point from my latest guest piece – JUST OUT (but written prior to riots) – @RedAlert on #MiloYiannopoulos https://t.co/7DILd3RYNO pic.twitter.com/FPzzfnsrFb

The Breitbart News editor was set to deliver a speech inside a UC Berkeley campus building but hundreds of protesters began throwing fireworks and pulling down the metal barricades police set up to keep people from rushing into the building. Windows were smashed and fires were set outside the building as masked protesters stormed it.

The Berkeley Police Department said people threw bricks, smoking objects, and fireworks at police officers. University police locked down all buildings and ordered a shelter in place, and later fired rubber pellets into the crowd of protesters who defied orders to leave the area.

Protests against alt-right speaker Milo move off UC Berkeley campus and into the streets. pic.twitter.com/c8CKFszmPJ

“This is what tolerance looks like at UC Berkeley,” said Mike Wright, a Berkeley College Republican member said as smoke bombs went off around him. Someone threw red paint on him. “It’s sad.”

Protesters argued that hate speech isn’t free speech, countering the university’s explanation — free speech — on why it had allowed the event to proceed even as students demanded that the university cancel it. 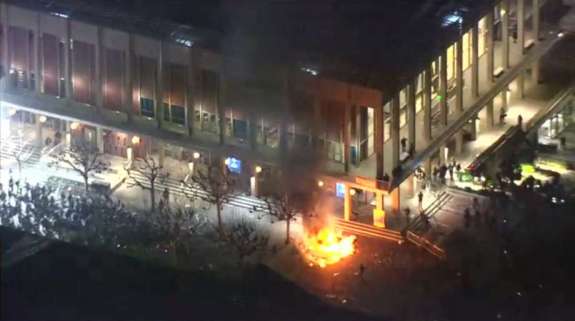 Yiannopoulos was invited to speak at the campus by the Berkeley College Republicans, a student group that was warned Tuesday by university officials that the event could result in the targeting of undocumented students. Yiannopoulos, an editor for the right-wing Breitbart News website, was expected to use the event in Berkeley to kick off a campaign against “sanctuary campuses” that have vowed to protect undocumented students as President Trump cracks down on illegal immigration.

Here’s a UC Berkeley ‘Antifa’ rioter attacking a female #Trump supporter, then beating a man with a flag-pole… pic.twitter.com/yWWmjXgXTW

Police now on the second floor balcony shooting pellets (tear gas, I think) into the crowd. Chants of “fuck the police.” pic.twitter.com/rIoUu3f5np

Violence at UC Berkeley by antifa. This is not a protest #miloatcal pic.twitter.com/7tGd8q0ZTd

Event that was to feature a speech by alt-right figure Milo Yiannopoulos canceled amid protest on UC Berkeley campus https://t.co/MtKh0vdfdo pic.twitter.com/habG0p2PiM

Three lines of zip-tied metal fencing separated the crowd of protesters from campus police officers who had secured the building where Yiannopoulos was supposed to speak at 7 p.m. He had arrived earlier, escorted by security, and police said he had left the building after the protests erupted. END_OF_DOCUMENT_TOKEN_TO_BE_REPLACED

AIDS activists and others are asked to leave the lobby during a protest highlighting pharmaceutical drug pricing. AP Photo/Craig Ruttle, File

Martin Shkreli, the 32-year-old hedge fund and pharmaceutical industry guru who alienated large swaths of America by dramatically jacking up the price of a life-saving drug this September, was arrested by the FBI at his home in Manhattan early Thursday morning, as Bloomberg reports.

Shkreli first rose to national prominence when he raised the price of Daraprim, a drug that treats toxoplasmosis, from $13.50 to $750 overnight. The move drew condemnations from across the political spectrum, as well as the scrutiny of Congress, but after briefly suggesting he would walk back the price hike, Shkreli decided to go ahead with it. He even teased plans to acquire the rights to—and significantly raise the price of—another infectious disease treatment earlier this month. END_OF_DOCUMENT_TOKEN_TO_BE_REPLACED 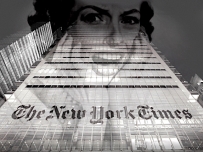 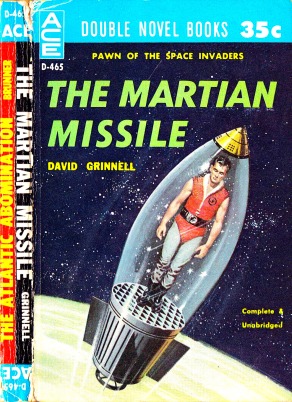 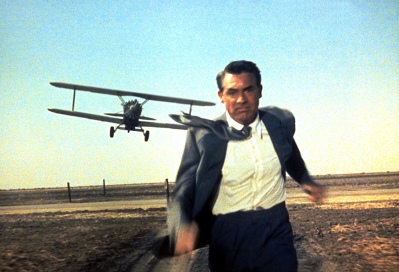