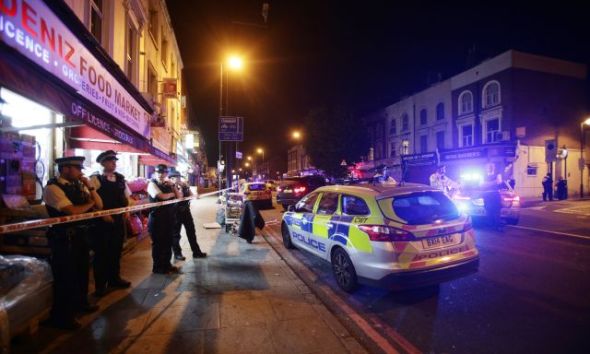 … The driver of the vehicle, a large white van, was arrested on the scene. While police have not released his identity, he was described in numerous accounts as being a white man. The Financial Times cited witnesses who counted at least a dozen people injured. The newspaper also said the driver “looked happy” and was waving to onlookers as he was arrested. Another witness told BuzzFeed that the driver said he was going to “kill all Muslims.”

Police have thus far declined to say whether they are labeling the incident in a neighborhood popular with immigrants as a terrorist attack. END_OF_DOCUMENT_TOKEN_TO_BE_REPLACED

Cuckoo for Coconuts: Where It’s Legal for Women to Go Topless in the U.S.A

A guide to patchwork and confusing laws on taking it off

Sarah Begley reports: Local officials in the Venice Beach neighborhood of Los Angeles voiced support this week for allowing women to sunbathe topless, calling the move “a serious equality issue” and citing the city’s Italian namesake as one of many European regions where toplessness is socially acceptable. But topless sunbathing is illegal in the city and county of Los Angeles, and the local disagreement is just the skin of a patchwork of nudity laws and customs that vary by state and municipality across the country. 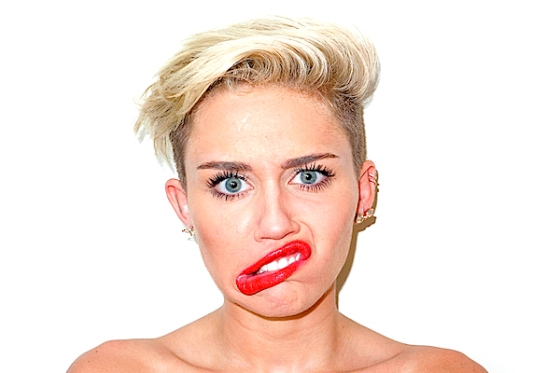 The vast majority of states actually have laws on the books making clear that women can’t be arrested under state law solely for being topless in settings where it’s OK for men. But many local ordinances ban the practice anyway. And there’s plenty of grey area for police officers to make their own interpretations and make arrests for “public indecency” or “disorderly conduct.”

Celebrities like Chelsea Handler and Miley Cyrus have been public critics of what they call a double-standard that women face when it comes to going shirtless, and have tried to get Instagram to stop taking down photos of breasts, garnering some support with the hashtag #FreeTheNipple. Scout Willis, daughter of the actor Bruce Willis, recently illustrated the point that women are technically permitted to walk the streets of New York City topless—but not to post topless photos on Instagram—by posting shirtless photos of herself on city sidewalks to Twitter. END_OF_DOCUMENT_TOKEN_TO_BE_REPLACED

‘It’s a pop take on S&M. She’s starting to become more of a contemporary artist’ 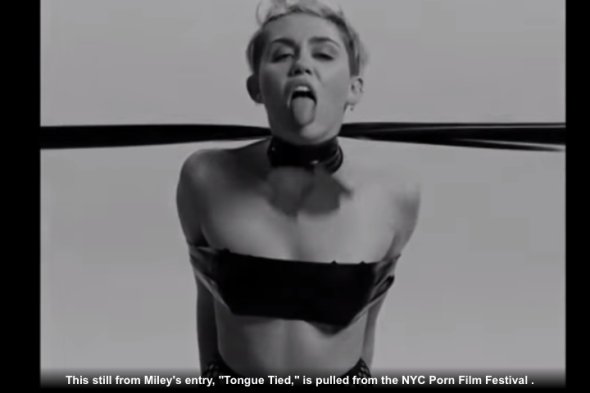 Tim Donnelly writes: For a while now, Miley Cyrus has been inching closer to pornography with her increasingly revealing outfits and scandalous dance moves. Now she’s going to appear in an actual pornography festival.

“It’s not pure pornography — the video has no sex, and though she writhes around in her underwear, she keeps her nipples covered. But it’s full of bondage imagery: Cyrus dons a blindfold, has her legs constrained by straps and is tied to a chair with only black tape covering her nipples.”

The video was released online in May, and Cyrus used it during her shows on her Bangerz Tour last year.

“It’s a touch ‘Fifty Shades’ with a pinch of Madonna’s ‘Justify My Love’ video.”

Leahy says they contacted Cadence, the production company that made the film with director Quentin Jones. END_OF_DOCUMENT_TOKEN_TO_BE_REPLACED 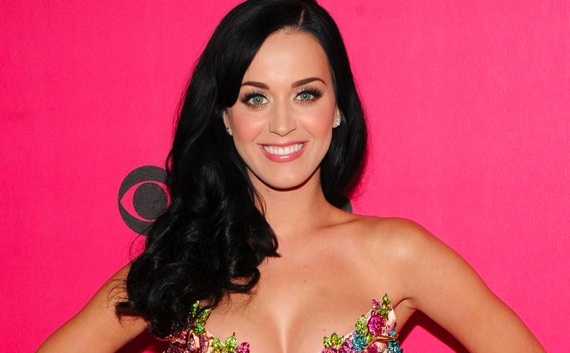 Katy Perry and Miley Cyrus were supposedly girlfriends! — but are they anymore? Comments Perry made on TV while promoting her Prismatic tour Down Under made their way halfway around the world, and Cyrus is not happy.

It all started Monday on Australia’s “Sunrise” program, when one of the hosts riffed off Perry’s hit “I Kissed a Girl” to lead into a discussion of the “Roar” singer’s recent lip-lock with Cyrus during one of the “Wrecking Ball” singer’s shows.

Note: Use Lois Lerner story only if the new photos of Miley Cyrus don’t come in by deadline. Bump this, see if there’s any room for it next week, thanks. –Ed. Move to Page D 17, bottom of page: “Emails Show IRS Lois Lerner Specifically Targeted Tea Party”

Stephen Dinan and Seth McLaughlin report:  Lois G. Lerner, the woman at the center of the Internal Revenue Service scandal over special scrutiny of conservative groups, specifically targeted tea party applications and directed that they be held up in 2011 in order to come up with an agency policy, according to several of Ms. Lerner’s emails released by a House committee Thursday.

“Tea Party Matter very dangerous,” Ms. Lerner wrote in the 2011 email, saying that those applications could end up being the “vehicle to go to court” to get more clarity on a 2010 Supreme Court ruling on campaign finance rules.

END_OF_DOCUMENT_TOKEN_TO_BE_REPLACED

Interview With Camille Paglia: A Feminist Defense of Masculine Virtues 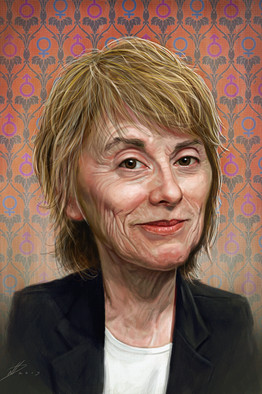 Bari Weiss writes:  ‘What you’re seeing is how a civilization commits suicide,” says Camille Paglia. This self-described “notorious Amazon feminist” isn’t telling anyone to Lean In or asking Why Women Still Can’t Have It All. No, her indictment may be as surprising as it is wide-ranging: The military is out of fashion, Americans undervalue manual labor, schools neuter male students, opinion makers deny the biological differences between men and women, and sexiness is dead. And that’s just 20 minutes of our three-hour conversation.

When Ms. Paglia, now 66, burst onto the national stage in 1990 with the publishing of “Sexual Personae,” she immediately established herself as a feminist who was the scourge of the movement’s establishment, a heretic to its orthodoxy. Pick up the 700-page tome, subtitled “Art and Decadence From Nefertiti to Emily Dickinson, ” and it’s easy to see why. “If civilization had been left in female hands,” she wrote, “we would still be living in grass huts.”

The fact that the acclaimed book—the first of six; her latest, “Glittering Images,” is a survey of Western art—was rejected by seven publishers and five agents before being printed by Yale University Press only added to Ms. Paglia’s sense of herself as a provocateur in a class with Rush Limbaugh and Howard Stern. But unlike those radio jocks, Ms. Paglia has scholarly chops: Her dissertation adviser at Yale was Harold Bloom, and she is as likely to discuss Freud, Oscar Wilde or early Native American art as to talk about Miley Cyrus.

Ms. Paglia relishes her outsider persona, having previously described herself as an egomaniac and “abrasive, strident and obnoxious.” Talking to her is like a mental CrossFit workout. One moment she’s praising pop star Rihanna (“a true artist”), then blasting ObamaCare (“a monstrosity,” though she voted for the president), global warming (“a religious dogma”), and the idea that all gay people are born gay (“the biggest canard,” yet she herself is a lesbian).

But no subject gets her going more than when I ask if she really sees a connection between society’s attempts to paper over the biological distinction between men and women and the collapse of Western civilization.

END_OF_DOCUMENT_TOKEN_TO_BE_REPLACED

Why is our go-to political strategy for beating our opponents to silence them? Why do we dismiss, rather than engage them?

“It seems like, to me, a vagina—as a man—would be more desirable than a man’s anus. That’s just me. I’m just thinking: There’s more there! She’s got more to offer. I mean, come on, dudes! You know what I’m saying? But hey, sin: It’s not logical, my man. It’s just not logical.”

As you can imagine, everyone had an opinion about this statement, including GLAAD and Phil’s check-signer, A&E, who suspended the star indefinitely.

One of the conservative tweeters I follow—one of those Christians convinced that Obama is going to have him killed for his faith—lives for stuff like this. He quickly took to the Twitterverse and posted a side-by-side image of Pope Francis and Phil, with the following caption: “Both preach truth on homosexual sin. One is TIME’s Person of the Year. The other JUST GOT FIRED.”

The point is worth considering. Even though Phil used crass, juvenile language to articulate his point, what he was getting at was his belief that homosexual “desire” is unnatural, and inherently disordered. This opinion isn’t unique to Phil. It’s actually shared by a majority of his fans.

It’s also shared, to some extent, by the Pope. Yes, that Pope—the one on the cover not just of TIME but also of The Advocate.

END_OF_DOCUMENT_TOKEN_TO_BE_REPLACED

Heather Wilhelm writes:  Over the past few weeks, depending on where you sit on the political school bus, you’ve probably either had (a) a stream of guilty “I told you so” happiness; or (b) a dreadful, stomach-sinking horror while watching Obamacare, the president’s oft-labeled “signature achievement,” make its national debut.

It has been, in short, an epic disaster. It is a drunken, hair-mussed, ill-shod debutante tripping and tumbling down one of those long, open, curving, red-carpeted staircases, and then, at the bottom, plowing directly through a gaggle of gasping society ladies.

And that was just the website. Add the alarming swath of health care cancellations across the country, and you’ve got the boozed-up debutante struggling to her feet, swigging from a whiskey bottle at the bar, and inexplicably punching her great-grandmother’s sweet best friend Trudy in the face.

END_OF_DOCUMENT_TOKEN_TO_BE_REPLACED

In an amateur video posted on Youtube, the latest talent discovery will bring goosebumps, as she performed the former child star’s latest hit. She was singing with a mic in one hand and braille lyrics, in another.

In some information circulating on Facebook, the girl was simply identified as “Joyce,” a Grade 5 student from Brgy. Luzon in Governor Generoso town located in southernmost Philippines.

Two days after uploading, the video had reached close to 60,000 views and has since made the rounds of social media. “Blind Girl Sings Wrecking Ball,” is also fourth in the hot picks list of Yahoo in the Philippines as of Friday, October 25.

Society is Coarser But Better

Yes, pop culture is crude, but who gives an F-word? By virtually every measure, we’re a safer, nicer, kinder country.

“I am glad that I’m not raising kids today,” Supreme Court Associate Justice Antonin Scalia recently told New York magazine. Though known for Torquemada-like inquisitions of lawyers during oral arguments and brutally lapidary prose in his written opinions, the 77-year-old jurist practically gets the vapors when engaging today’s popular culture. “One of the things that upsets me about modern society is the coarseness of manners. You can’t go to a movie—or watch a television show for that matter—without hearing the constant use of the F-word—including, you know, ladies using it…. My goodness!”

Scalia has at least one unlikely high-profile ally: Pop singer Annie Lennox, who took to Facebook to denounce contemporary music videos, which she says are nothing more than “highly styled pornography.” And for what’s it worth, Gallup finds that 72 percent of Americans are convinced that “moral values” are getting worse.

I don’t know anyone who would seriously challenge the idea that America has become a far cruder society over the last 10, 20, or 30 years. There’s probably more sex, violence, and salty language in the opening credits of Keeping Up with the Kardashians than there was on all of prime-time TV when Scalia joined the Supreme Court in 1986.

END_OF_DOCUMENT_TOKEN_TO_BE_REPLACED 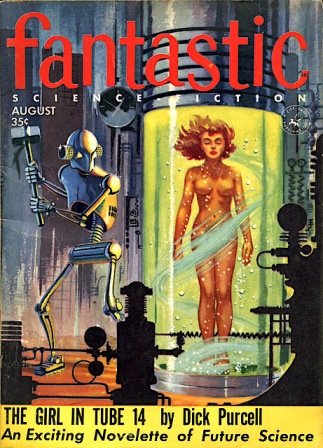 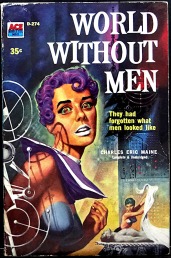