[VIDEO] Are Some Cultures Better than Others?

Are some cultures better than others? Or are all cultures and their values equal? Bestselling author Dinesh D’Souza, who was born in India and moved to America, explains.

Monoculture in agriculture is really bad for biodiversity.

PARIS (AFP-Jiji) — A diet of corn is turning wild hamsters in northeastern France into deranged cannibals that devour their offspring, alarmed researchers have reported.

“There’s clearly an imbalance,” Gerard Baumgart, President of the Research Center for Environmental Protection in Alsace, and an expert on the European hamster, told AFP on Jan. 27.

“Our hamster habitat is collapsing.”

The findings, reported in the British Royal Society journal Proceedings B, finger industrial-scale monoculture as the culprit.

Once nourished by a variety of grains, roots and insects, the burrowing rodents live today in a semi-sterile and unbroken ocean of industrially grown maize, or corn.

The monotonous diet is leaving the animals starving, scientists discovered almost by accident.

The problem is a lack of vitamins. In fact, one in particular: B3, or niacin.

Researchers led by Mathilde Tissier at the University of Strasbourg had set out to determine whether hamster diet affects their ability to reproduce in the wild.

Earlier work had looked at the impact of pesticides and mechanized plowing, which can destroy their underground homes, especially during hibernation in winter.

But the possible link with what they eat remained unexplored.

A first set of lab experiments with wild specimens compared wheat and corn-based diets, with side dishes of clover or worms.

There was virtually no difference in the number of pups born, or the basic nutritional value of the different menus.

But when it came to survival rates, the difference was dramatic.

About four-fifths of the pups born of mothers feasting on wheat-and-clover or wheat-and-worms were weaned.

Only five percent, however, of the baby hamsters whose mothers ate corn instead of wheat made it that far.

What was most disturbing is how they perished.

“Females stored their pups with their hoards of maize before eating them,” the scientists reported. “Pups were still alive at that time.” END_OF_DOCUMENT_TOKEN_TO_BE_REPLACED

Tokyo (AFP) – Tokyo woke up Thursday to its first November snowfall in more than half a century, leaving commuters to grapple with train disruptions and slick streets.

The Japan Meterological Agency said it was the first time snow had fallen in November in central Tokyo since 1962.

Amounts were greater in suburban areas closer to mountains but even central Tokyo saw brief accumulations, which the agency forecast to be as high as two centimetres (one inch).

That was the first November accumulation since records began in 1875, the agency said.

“I was surprised to see snow at such an early stage of the season,” said Hiroko Tanaka, a Tokyo resident.

“I felt this may be a sign of something abnormal in terms of natural phenomena,” she told AFP.

But experts say the situation is nothing to worry about.

“Today’s snowfall and accumulation occurred because several elements came together at once by chance,” said Sakiko Nishioka, an agency official in charge of weather forecasting.

“It does not mean this can signal any unusual weather conditions this season such as a super cold winter,” Nishioka told AFP, adding that it was also unclear if it was related to climate change or events such as El Nino.

Tokyo, which extends over a wide area and includes many suburbs, enjoys relatively mild winters compared to some other parts of the country where snowfall is more frequent. END_OF_DOCUMENT_TOKEN_TO_BE_REPLACED

Ju-min Park reports: North Korea fired three ballistic missiles into the sea off its east coast on Monday, the South Korean and U.S. militaries said, as the leaders of the Group of 20 major economies held a summit in China, the North’s main diplomatic ally.

“We are still analyzing details but this is a grave threat to our nation’s security, and we express deep concern.”

The missiles were fired from a region south of the capital Pyongyang just after noon (10.00 p.m. ET) and flew about 1,000 km (600 miles), hitting Japan’s air defense identification zone, South Korea’s Office of the Joint Chiefs of Staff said. 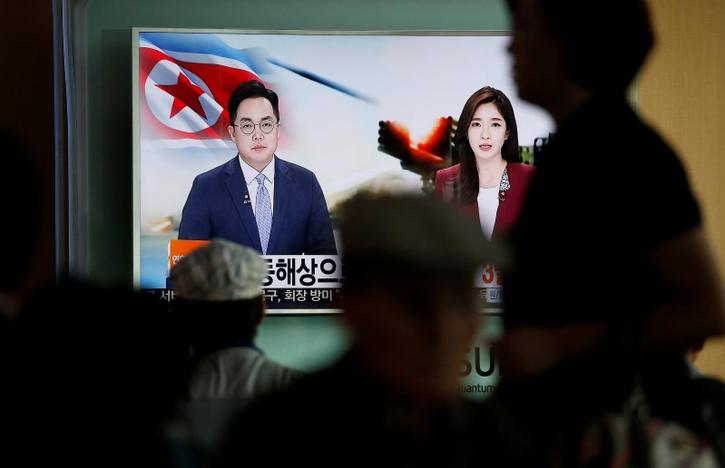 “We are still analyzing details but this is a grave threat to our nation’s security, and we express deep concern,” the Japan Defence Ministry said in a statement.

The launches drew immediate condemnation from the United States, which described them as “reckless,” and diplomats said the U.N. Security Council will discuss them behind closed doors on Tuesday at Washington’s and Tokyo’s requests.

Pyongyang rejects the ban as infringing its sovereign right to pursue a space program and self defense.

Shortly after the missile launches, South Korean President Park Geun-hye and Japanese Prime Minister Shinzo Abe met on the sidelines of the G20 summit and agreed to cooperate on monitoring the situation, a Japanese statement said.

The South’s military said the missiles were medium-range Rodong-class, launched as a show of force timed to coincide with the G20 summit. The U.S. Strategic Command said in a statement that two of the three were presumed to be “intermediate range” ballistic missiles and that the third was still being assessed.

In 2014, the North fired two Rodong medium-range missiles just as Park and Abe were meeting U.S. President Barack Obama at the Hague to discuss responding to the North’s arms program. END_OF_DOCUMENT_TOKEN_TO_BE_REPLACED

The MI6 spy who was found dead inside a holdall bag in his bathtub in London hacked into secret data held on former U.S. President Bill Clinton, The Sun newspaper has sensationally claimed today.

Breitbart London reports: Gareth Williams was 31 years old when he was found naked, dead in his own bathtub in Pimlico, just a few minutes walk away from Britain’s Houses of Parliament.

“The Clinton diary hack came at a time when Williams’s work with America was of the most sensitive nature.”

Speculation has been rife ever since his death in September 2010 about the circumstances surrounding his death. A Metropolitan Police investigation revealed predictably, though suspiciously, that Mr Williams’ death was “probably an accident”. This was despite an initial inquest concluding that his death was “unnatural and likely to have been criminally mediated.”

Since then the unexplained death has been the subject of investigation by the U.S. Federal Bureau of Investigation (FBI). The BBC reported as early as December 2010 that Mr Williams had been on secondment from Britain’s signals intelligence operation GCHQ to MI6, and then subsequently to the United States’ National Security Agency.

The Sun reports that Williams had “dug out the guestlist for an event the former American president was going to as a favour for a pal.”

…Mr Faulding, whose expertise is finding bodies or people stuck in confined places, made several other disturbing points which raise serious questions about the Yard’s new perception on the mystery.

When Mr Williams’s body was found on August 23, 2010, in his central London flat the door to the bathroom was shut and the light was off, making the room pitch black.

The shower screen was in place, making the space he had to move around very tight if he were to put the bag in the bath and then step into it. There were no palm prints on the bath, which meant Mr Williams, who was single and a maths genius, would have had to stand up in the bag first and then get into it. Mr Faulding said: “Entry into the bag needs to be shoulder first and then pulling the bag under the bottom, this would leave footprints at the end of the bath above the taps but there were none.

“The shower screen was closed. If he was practising getting into the bag this would have been wide open as it creates a barrier. No finger, foot, palm prints or DNA belonging to Gareth Williams were present on the rim of the bath, padlock or zipper. He was not wearing any gloves.” Mr Faulding added: “If he was practising or dabbling in escapology he would have carried a knife in the bag to release himself, he was an intelligent individual and not a chancer….(read more at express.co.uk)

The Sun on Sunday can reveal that voicemail messages Mr Williams left for family and pals were deleted in the days after his death. And a rival agent may also have broken into the flat to destroy or remove evidence.
END_OF_DOCUMENT_TOKEN_TO_BE_REPLACED

“…What is striking about these films is that, murder aside, they are very close to the mark in depicting American Communists. As Jim McClain suspected, for example, screenwriters such as John Howard Lawson and Dalton Trumbo, while publicly defending the Bill of Rights, privately amended it. Behind closed doors, Lawson declared that “fascists” (a term defined rather broadly in his lexicon) were ineligible for free-speech protections. Trumbo would later brag to comrades of how he kept anti-Communist films from being made and of how he suppressed anti-Communist submissions to a Hollywood journal he edited during the war. Far from supporting free speech as editor, he told an anti-Communist writer that “free speech” was what had led to the gas chamber in Germany…”

Air Aviv, branded as “The World’s Sexiest Airline,” flies to over 40 destinations across Europe, Asia, Africa and the Americas

The separate section – to be located at the rear of each aircraft – will offer five rows of business class-quality seats, each with widescreen flat screen with over 10,000 free adult films, retractable privacy shutters, complimentary lubricant, hand towel and one disposable sex toy per passenger.

“With our adults-only class, we are taking the pleasure of flying to a new level.”

Exclusive double and triple pods will also be available, and an inflight “Sky Spa” will offer an assortment of massage and beauty therapies.

“With our adults-only class, we are taking the pleasure of flying to a new level,” said Air Aviv CEO Dana Dagdani. “Just wait till we launch entire adults-only flights to selected destinations – themed, chartered and perfect for bachelor or bachelorette parties, Gay Pride convoys and groups of kinky Arabian princes.” END_OF_DOCUMENT_TOKEN_TO_BE_REPLACED

PopMech Editors: Say hello to the shortest lunar eclipse of the century. These stunning photos capture the blood moon as captured over Colorado, China, and New Zealand. For more, check out our original post on the early morning event.

‘The Hunger Games: Mockingjay Part 1′ on Course for $10 Million Opening Day in China

The film opened on Sunday (Feb. 9) on some 4,000 screens. Preliminary estimated data points to an opening day score of $10.1 million (RMB62 million).

That puts it miles ahead of previous “Hunger Games” excursion “Catching Fire,” which earned $12.9 million in its first full weekend, and ended with a final China gross of $27.9 million. END_OF_DOCUMENT_TOKEN_TO_BE_REPLACED