‘Float Like a Bee, Sting Like a Butterfly’: Mitt Romney Lasts Two Rounds with Evander Holyfield in Charity Boxing Match 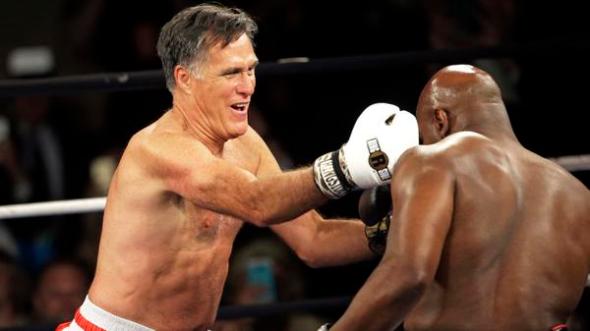 Romney, 68, and Holyfield, 52, sparred, if you could call it that, for just two short rounds before Romney ran away from the boxer and threw in the towel, giving up a round early in the lighthearted fight that came amid several other fights by professional boxers and an auction.

The two barely threw any punches and largely just danced around, occasionally lightly jabbing each other in the midsection in what was much more of a comedic event than an actual bout.

[VANILLA IN MANILLA! The Match-Up You’ve Been Waiting for: Evander Holyfield vs. Mitt Romney Charity Boxing Event May 15th]

The black-tie affair raised money for the Utah-based organization CharityVision, which helps doctors in developing countries perform surgeries to restore vision in people with curable blindness.

Romney’s son Josh Romney, who lives in Utah, serves as a volunteer president for CharityVision. END_OF_DOCUMENT_TOKEN_TO_BE_REPLACED

VANILLA IN MANILLA! The Match-Up You’ve Been Waiting for: Evander Holyfield vs. Mitt Romney Charity Boxing Event May 15th

Mitt Romney said that he would pass on running in 2016 because, while he thought he could win, he’d be too battered by the process. So instead, he’ll box Evander Holyfield.

We are not making this up.

The Salt Lake Tribune broke news of the bout Monday. It’s a charity event, to be held May 15 near Salt Lake City, with proceeds going to Charity Vision. The Romneys have been active with the group for some time; last year, Mitt and his family traveled to Peru to help diagnose and treat eye problems. END_OF_DOCUMENT_TOKEN_TO_BE_REPLACED

Since the facility was built, Utah government has had up to 300 million attempted attacks a day

At the time, Utah Public Safety Commissioner Keith Squires thought that was massive. “But this last year we have had spikes of over 300 million attacks against the state databases” each day: a 10,000-fold increase.

Why? Squires says it is probably because Utah is home to the new, secretive National Security Agency computer center, and hackers believe they can somehow get to it through state computer systems. END_OF_DOCUMENT_TOKEN_TO_BE_REPLACED

Copies of the French satirical weekly “Charlie Hebdo” are seen in their Paris newsroom February 9, 2006. The publication reprinted cartoons of the Prophet Mohammad in its February 8, 2006 edition and published one of its own on its front page, angering Muslim groups at the time. Reuters

Political cartoonists from around the world reacted with grief and words of support on Twitter after several of their French colleagues at the political satire newspaper Charlie Hebdo were shot and killed in an apparent terrorist attack in Paris on Wednesday. Here are the words and drawings of a few of them:

Nate Beeler, editorial cartoonist for The Columbus Dispatch in Ohio:

Gary Varvel, editorial cartoonist for The Indianapolis Star in Indiana: 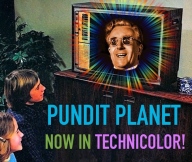 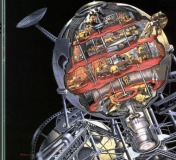