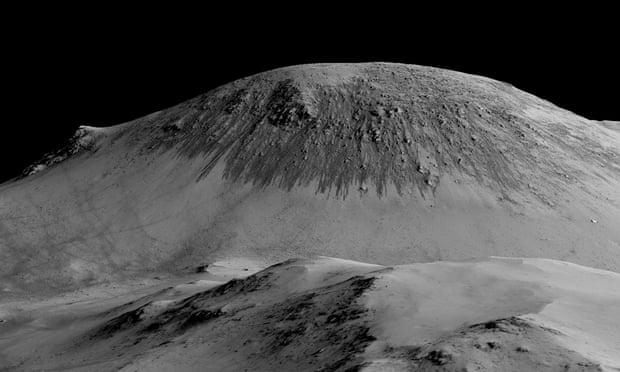 Liquid water runs down canyons and crater walls over the summer months on Mars, according to researchers who say the discovery raises the chances of being home to some form of life.

The trickles leave long, dark stains on the Martian terrain that can reach hundreds of metres downhill in the warmer months, before they dry up in the autumn as surface temperatures drop.

“The mystery has been, what is permitting this flow? Presumably water, but until now, there has been no spectral signature. From this, we conclude that the RSL are generated by water interacting with percholorates, forming a brine that flows downhill.”

Images taken from the Mars orbit show cliffs, and the steep walls of valleys and craters, streaked with summertime flows that in the most active spots combine to form intricate fan-like patterns.

Scientists are unsure where the water comes from, but it may rise up from underground ice or salty aquifers, or condense out of the thin Martian atmosphere.

“There is liquid water today on the surface of Mars,” Michael Meyer, the lead scientist on Nasa’s Mars exploration programme, told the Guardian. “Because of this, we suspect that it is at least possible to have a habitable environment today.”

The water flows could point Nasa and other space agencies towards the most promising sites to find life on Mars, and to landing spots for future human missions where water can be collected from a natural supply.

Some of the earliest missions to Mars revealed a planet with a watery past. Pictures beamed back to Earth in the 1970s showed a surface crossed by dried-up rivers and plains once submerged beneath vast ancient lakes. Earlier this year, Nasa unveiled evidence of an ocean that might have covered half of the planet’s northern hemisphere in the distant past. 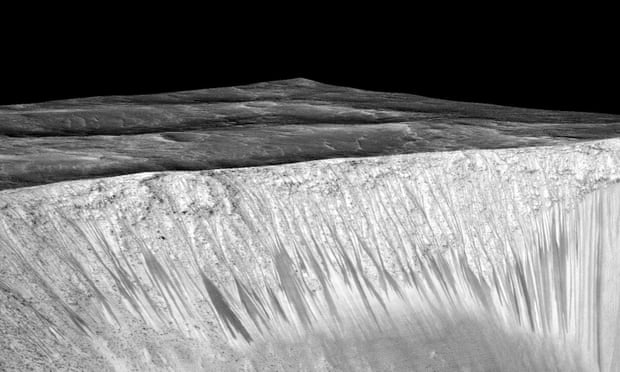 But occasionally, Mars probes have found hints that the planet might still be wet. Nearly a decade ago, Nasa’s Mars Global Surveyor took pictures of what appeared to be water bursting through a gully wall and flowing around boulders and other rocky debris. In 2011, the high-resolution camera on Nasa’s Mars Reconnaissance Orbiter captured what looked like little streams flowing down crater walls from late spring to early autumn. Not wanting to assume too much, mission scientists named the flows “recurring slope lineae” or RSL.

Researchers have now turned to another instrument on board the Mars Reconnaissance Orbiter to analyse the chemistry of the mysterious RSL flows. Lujendra Ojha, of Georgia Institute of Technology in Atlanta, and his colleagues used a spectrometer on the MRO to look at infrared light reflected off steep rocky walls when the dark streaks had just begun to appear, and when they had grown to full length at the end of the Martian summer. END_OF_DOCUMENT_TOKEN_TO_BE_REPLACED

HIGH & DRY: Marijuana Plants Soak Up Billions of Gallons of Water in California

Ethan Epstein writes: California’s terrible drought has become — like just about everything else in the United States — a political issue. Many liberals have taken to blaming anthropogenic climate change for the drought, while some conservatives have placed the blame at the feet of “liberal environmentalists.” The political point-scoring is tiring and just plain silly, given that the drought is almost certainly a result of natural processes — processes that we humans, conservatives and liberals alike, have precious little to do with. Another problem is that our partisan pugilists are conflating two separate issues: the drought, which is the lack of rainfall that California has suffered over the past four years, and the water shortages, which may indeed have some man-made causes.

“Over California’s four-year drought, outdoor marijuana plants — based on the six-gallon a day estimate, and the 2006 figure — have used roughly 63 billion gallons of California water.”

To that end, a San Francisco-based author with a PhD in Nutritional Ethnomedicine floated an interesting theory regarding those water shortages earlier this week.  Speaking on the radio, he suggested that California’s huge crop of marijuana plants is “depleting the water table,” and is partially responsible for the massive shortfalls in water that the state is now facing.

“…by some estimates, California now produces more marijuana than Mexico.”

It may sound outlandish, but it turns out that there may be something to the good doctor’s theory.

As anyone who has ever had the misfortune to visit, say, Santa Cruz can attest, there’s a lot of marijuana in California. (This despite the fact that it’s only legal for medicinal use in the state.) Indeed, by some estimates, California now produces more marijuana than Mexico.

END_OF_DOCUMENT_TOKEN_TO_BE_REPLACED

Revolutionary Scuba Mask Creates Breathable Oxygen Underwater On Its Own

Designer Jeabyun Yeon has created something great.  Essentially it turns humans into fish.

– It extracts oxygen under water through a filter in the form of fine threads with holes smaller than water molecules.

– This is a technology developed by a Korean scientist that allows us to freely breathe under water for a long time.

– Using a very small but powerful micro compressor, it compresses oxygen and stores the extracted oxygen in storage tank.

– The micro battery is a next-generation technology with a size 30 times smaller than current battery that can quickly charge 1,000 times faster.” – Yanko Design

END_OF_DOCUMENT_TOKEN_TO_BE_REPLACED

A beluga whale keeps spouting water at a little kid while the rest of his family laugh hysterically.